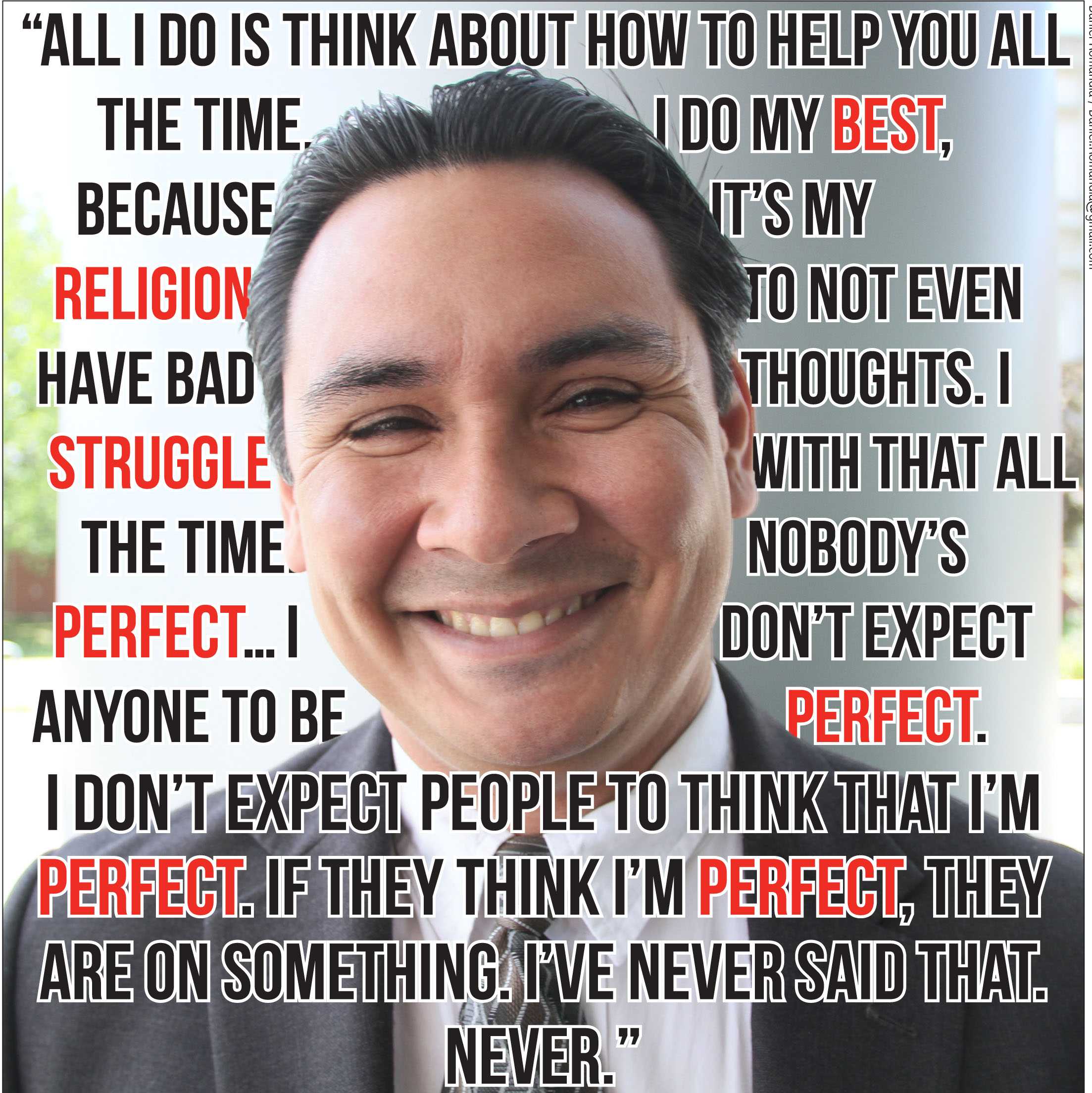 Amidst protests and controversy, newly elected Associated Student Body Director of Finance, Jorge Riley, tells The Current about his personal struggles and goals for ASB.

His pale blue button-up collar shirt, pressed dark slacks, and polished shoes made him a standout among the other casually dressed students in the cafeteria that late afternoon.

Riley’s obsidian hair was slicked back halfway down his neck, just an inch or so short of being pulled back into a ponytail, a look he has previously sported in his 10 years at American River College.

Although his professional appearance is one of the first things people may notice about him, it’s not exactly what he’s known for on campus.

2008 was a notorious year for ARC, and Riley was right in the middle of it. The ASB voted 8-3-3 to publicly endorse and support Proposition 8 in California. As a school that welcomes and supports its wide diversity of students, this vote did not go over well with some of the ARC community.

Many argued that Riley voted strictly on his personal beliefs, but he believes he should not be blamed for the outcome. “I didn’t write the bill. I didn’t write the resolution,” he explained. “I think that you could be opposed to me. In reality, I didn’t bring my religion into it to begin with. That was all of them attacking me.”

REACTION TO WHAT PEOPLE THINK OF HIM.

“It is the belief of Fierce that these actions were diametrically opposed to the mission of [ARC], and demonstrated an unabashed ignorance for the purpose of student government and the plight of the LGBT community,” said their press release. “A candidate for office should be willing and able to represent all views to the best of their ability, and should concentrate on representing views pertaining to the education of college students, not their opinions on civil rights issues.”

The opposition hit Riley hard. “I had some posters that got torn down right after they went up. That hurts my feelings,” he said. “I told them, ‘you know I’m going to go home and cry, right?’ My friends say I’m too sensitive, but I’m not afraid to cry. I’m not insecure.”

In reaction to how people have portrayed Riley, Michael Tupper, a paralegal major, said, “I don’t like it. I’ve heard a couple of people make comments of, ‘Oh, he’s just a conservative.’ But there’s no real context into why they don’t like him.”

Riley was elected to office again this past April—uncontested with many more yes than no votes.

“The people who were opposed to me, I came back here and I said, ‘now that I’ve won, I want to reassure you that you were worried about nothing.’”

“I’ve been through so many things. People putting me down, a lot of things that most students go through,” said Riley of his life.

He’s a local boy, living in the area since the age of 10. Before then, he had it rough in Southern California, living in battered wives shelters as an abused child with his single mom. “I’ve been homeless. I have no real support system, no kind of family. I’m pretty much on my own,” he adds.

However, Riley showed strong determination later in life. While at Del Campo High School, he was in ROTC, played varsity water polo and worked as a subcontractor for attorneys. He’s the first person in his family to graduate from High school. At age 17, he went into the Army.

When Riley returned home, he wasn’t back to normal. Due to multiple injuries, he has endured constant physical pain since age 21. “My whole body hurts,” he said, detailing problems with his back, knees and elbows. “I’ve been blown up, shot, ripped apart. I’m in pain 24/7.”

Despite his physical condition, Riley utilized his GI bill and has been in college for 10 years now, and he doesn’t plan on stopping anytime soon.

When asked what degrees he’s earned, he takes a deep breath and says, “This semester I graduate with my associate degree in business. Next semester I finish my degree in real estate. The following semester, I’ll finish my degree in paralegal studies. I have three semesters left at Sac State to get my bachelor’s in forensics accounting. And I already have my ‘finger painting degree,’ which I call liberal arts. I have certificates in management, accounting and taxes. Those are all the way done.”

A typical morning for Riley starts with work at the Capital. Afterwards, he heads to ARC, taking back-to-back classes from 1:30 p.m. to sometimes 10:00 p.m. at night. Despite his busy schedule, he receives stellar grades in almost every class. How does that make him feel to have his hard work pay off? “I’m tired,” he sighs.

Once all of his degrees are complete, he has even bigger plans for himself, including challenging the bar exam without having attended law school, of which Riley said, “I really think I have a pretty good shot at doing.” He also wants to travel to France and Spain for his MBA, then continuing on to Louisiana for his Doctorate.

“You can do anything you put your mind to. It still is not enough for me. I always think I’m not doing enough.” Riley said.

“I talk to everybody, everywhere I go. I love people…I love to listen to them,” Riley said.

Riley’s love for people is one of the main reasons he’s involved with ASB. “I love to watch them grow. When we start classes, so many people are unrefined, and then they start to become this thing they are striving for. I think people should support that.”

One way he showed his love for both people and education was to literally talk to people on the street and encourage the benefits of a college education.

“I said ‘Hey, I’m going to school, I’m doing all of these things, come with me,’” Riley explained. “So many people sat there and watched me go on and watched me overcome obstacle after obstacle, watching me struggle. And now they see that I am getting somewhere.”

Riley claims to have brought over more than 1,000 students to ARC this way.

“I’ve spent the entire time I’ve been here passing on all of that knowledge, signing people up and helping to point people in the right directions.”

“He’s a really friendly person… really easy to talk to,” said Daniel Winslow, a legal assisting major. As proven before, Winslow added, “He’ll talk to anybody, inside or outside of class like it’s no big deal.”

HIS GOALS FOR ARC

“All I want to do is put some more textbooks in the library and keep my word on my campaign promises. I want to try and be an efficiency expert and help the school to be able to use its resources that are wasted every semester,” Riley said of his goals as the new Director of Finance for ASB.

He also has goals for the entire ASB organization. “I’d rather they focus on the issues of security on campus, the issue of our cuts that are coming from the budget and why we need to have textbooks and resources available. I would like student government to join me and help me to accomplish all of these goals,” said Riley.

Not everyone is excited about having Riley in office again. “I know very few people who are even remotely okay with him being in office. In my personal opinion, people are not looking forward to working with him,” said a source close to other ASB officers.

Riley, however, doesn’t want any personal feelings to stand in the way of getting business done.

“That includes me biting my lip to deal with it too, which I don’t mind doing. I don’t have a problem working with any of them,” he said. “I want them to table [those feelings] and not even talk about it the whole year I’m in office. That would make me very happy.”

As the new term for ASB begins, and the campaigns against him fade, Riley rests on his confidence. “I’m not really worried… because I don’t really dwell on it,” he said. “But I imagine that at the end of the year, people will be pretty happy with me.”

Be the first to comment on "ASB Director of Finance Jorge Riley: Profile of a Controversial Candidate"