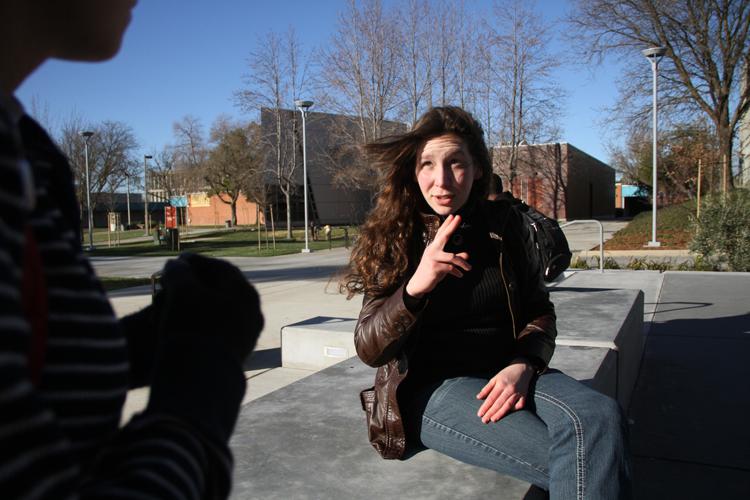 Wendy Weller, a linguistics of American Sign Language and other sign languages major, signing on Feb. 26 in front of the Student Center on the ARC campus. (Photo by Daniel Romandia)

Many are against CSUS possibly voting to remove foreign language requirements. Because it would affect students understanding other cultures.

For many college students, the prospect of having fewer class requirements may seem like a blessing. However, studies show that up to 80 percent of students enter college without knowing what to major in. Many classes are being taken by students in order to complete unit requirements, ultimately influencing the most important decision a student can make: what major to declare.

On Feb. 14, the Faculty Senate of California State University, Sacramento, prepared to vote to recommend cutting foreign languages from the general education requirements.

Individual professors from ARC were the only people to speak out for the Los Rios Community Colleges District. Sign Language Professor Eileen McCaffrey was among them.

“Students from American River College who graduate in the Interpreter Preparation Program come to Sac State to complete a bachelor’s in deaf studies,” said McCaffrey to the senate body. “We collaborate to meet the needs of hard of hearing people in our community throughout Sacramento, and, really, throughout all of Northern California.”

With potential caps of 120 units, proponents feel that students with majors requiring high unit classes may be losing courses vital to degree completion due to the foreign language requirements. Opponents argue overall learning, appreciation of other cultures, and the modern globalization of many industries are important reasons to keep the requirement.

Numerous people, ranging from students and professors to local business owners and non-profits, spoke from the senate gallery attempting to influence the decision set before the senate body.

Many voices spoke in favor of keeping the requirement, causing the few proponents to seem overwhelmed. The abundance of speakers caused one senator to suggest a change to the start date of the proposal, which only allowed the opponents to filibuster, despite limited speaking time.

The confusion prolonged the discussion long enough to hold any action the senate could possibly take until the next meeting, which is to be held Thursday, Feb. 28.

The more than 70 faculty senate members sat along the three long rows of tables with many interpretations of the impact their decision could make. If the vote passes, language departments could potentially be cut in half due to fewer students taking language classes.

Wendy Weller, an ARC student majoring in Linguistics of ASL and other Signed Languages, says removing the requirement will be “taking away many enriching experiences from students.” For her, “learning any foreign language introduces a person to a new culture, new concepts, and a different way of life. If higher education encourages critical and open thinking, why reduce coursework that encourages just that?”

New and improved student center opens to much fanfare