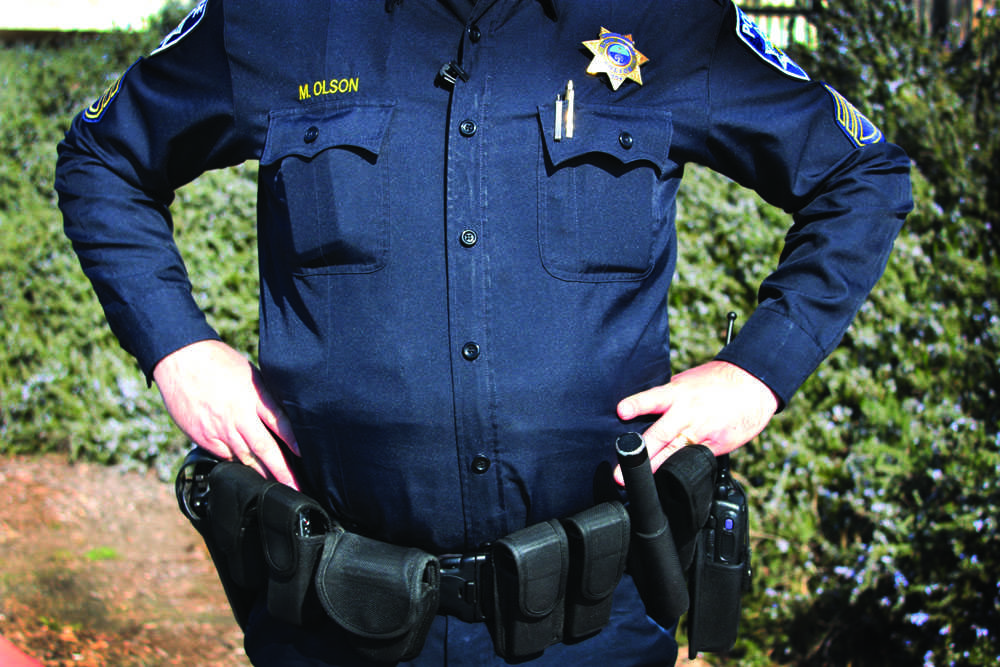 American River College Campus Police, such as Sgt. Mike Olson, carry firearms for the safety and security of all students, staff, visitors and property. (Photo by Emily K. Rabasto)

With the federal policies and regulations regarding guns on the nation’s mind, there is talk about arming teachers on school campuses. While considered mostly for kindergarten through high schools, colleges and universities are no stranger to gun violence.

“People want to feel safe on campus and I think that the District does an excellent job of that,” said Scott Crow, Interim Public Information Officer at ARC. “People only see the police as the ones who hand out the parking tickets, unfortunately.”

“In reality, they do a lot of good work behind the scenes: emergency planning, a lot of safety training that really pays off,” Crow said. “People don’t see it because things don’t happen.”

ARC follows the Los Rios District wide policy dealing with guns on campus, which is under California Penal Code Section 626.9. This penal code is known as the Gun-Free School Act. Enacted in 1995, the code makes it unlawful to carry a weapon in “school zones.”  However, it also states that only those individuals with concealed weapons permits are allowed to possess a firearm on campus. This includes police, staff, students and any individuals coming on campus for events.

The process to obtain a concealed weapons permit in Sacramento County is lengthy and meticulous. After this process, those individuals need to present their license to the school sheriff’s department and obtain clearance from the campus police to carry that weapon.

Although ARC campus police keep students’ safety as a top priority, Crow explains that students must also look out for each other.

“We will always want to emphasize that the police would rather have 100 [incidents] reported that are false alarms than to not have some behavior that is of some concern not reported,” said Crow. “If that’s not reported, then we don’t know about it. People need to err on the side of letting police know about behavior concerns.”

ARC safety is also on the minds of the Associated Student Body. The ASB has representatives in the Building, Grounds, & Safety Committee looking out for the needs of students.

“I know of one teacher who does lock down drills with her students,” said ASB Senator Suzy Williams. She is one of the students in the class who can help with lock down drills.

With the campus police on speed dial on her cell phone, the awareness of students like Williams help to ensure a safe environment on campus.