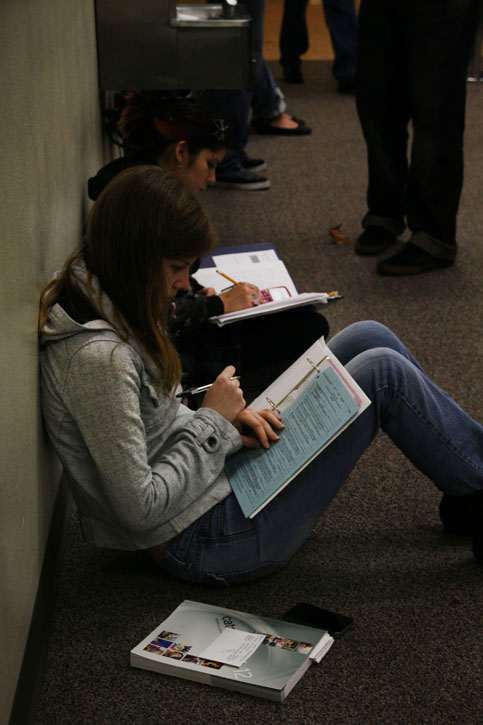 When you walk into the counseling office at the end of the year, you see chairs filled with students just waiting to hear their name called, a long line of people waiting to set up an appointment two weeks in advance and counselors calling out the names of students.

During the first week of October this year, before the spring 2013 class schedules were released, the counseling office only saw 660 students. That number rose to 880 students in the first week of November after the schedules were released. Some students had been in there for hours and decided to look for counseling advice elsewhere after finding it to be too difficult and unorganized.

“It’s horrible. I tried for 10 to 15 minutes to get a counseling appointment. I was calling in at 7:30 in the morning and I got nothing,” said American River College student Ceydi Shular. “It’s way easier (to get an appointment somewhere else in the LRCCD). I called into the Natomas Center and got one for the same week that they were applying for at ARC. It sucks here, but it’s better at other places.”

Even though it’s hectic this time of year, the counseling offices are trying to benefit students anyway possible when they have a small budget. According to the Dean of Counseling Jeffery Stephenson, the matriculation funding has been cut about $1 million and 95 percent of counseling’s budget goes towards staffing adjunct counselors to help out with the other 26 counselors on staff. The difficulty is that everyone comes in at the end of the semester and should come in during earlier months.

“We encourage students to come during non-peak times. A student can come and see a counselor at any time,” said Stephenson. “We would hope that students would plan ahead, like in September or October (when) it’s really really quiet in the counseling center. It would be a great time for students to come in and they wouldn’t have to wait as long.”

They are looking at ways to use technology to help out the large number of students. Some ideas include Google Hangout, which is similar to Skype, text-messaging notifications and group counseling for academic use only. Students also currently have the ability to phone-call counseling appointments. However, they do seem to hit a few roadblocks with students.

“We really do want to serve students, but you start to see there are all these little nuances,” said Interim Counseling Supervisor Dawn Siracusa. “Every time we think, ‘maybe we will text message,’ but then students can be charged for that.”

The counseling office also encourages student input and welcomes student’s ideas so they can build on them. They are always taping in to their student. As hard as the counseling center is trying, students should plan ahead to take advantage of the earlier months to see a counselor.

“We don’t like seeing our students having to sit in the lobby,” said Stephenson. “We like to serve our students as quickly as possible.”

‘tis the season for charity and giving

They found love in a foreign place