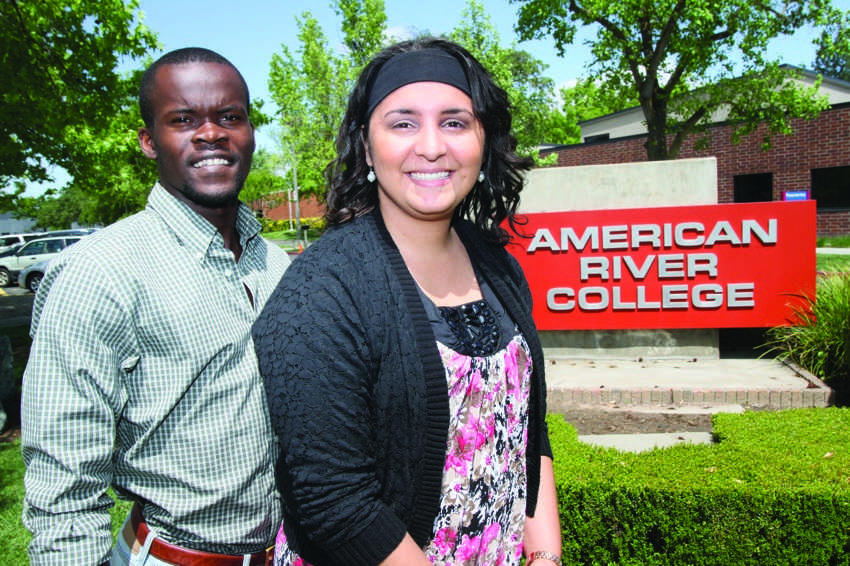 Omba Kipuke, left, and Quierra Robey became the new vice president and president of the ASB at American River College in April. (Photo by Bryce Fraser)

Robey has always wanted to be a part of politics. Her majors, communication studies and social sciences, have given her the poise and preparation for public service. Hoping for a future career in politics, July 1 would only be the beginning for the eager Beaver.

When Robey began her ASB senate career in 2010, she was shy and lacked confidence. Within 2 semesters, Robey has gone through a complete transformation. “Senate forces you to speak up,” she said.

Having served in the senate for the past two semesters, Robey is convinced she’s the third charm. She has credited her experience and knowledge as her main reason for future success. She won 175 yes votes, which is less than 1 percent of the student population.

“We talked to more than 1 percent,” she continued, “It’s important for people to know who we are.”
Robey’s goals for next semester’s senate are centered on an established structure; be prepared, organized and productive.

Robey admitted her biggest struggle is to remain neutral as a president. Robey enjoys speaking her mind and standing up for what she believes.

“The footprint I want to leave is; you can make a difference in student senate.”

Amid the clouds of barbeque smoke and the smell of tri-tip, Kipuke worked the crowd and showed his bravery as he opened his performance by singing “Happy Birthday” to his girlfriend, Marcie Ponzo, 21, a communications major at ARC.

“Everyone loves him, how can you not?” Ponzo asked as she pointed to him on stage.

Kipuke comes from a well-known Congan political legacy, following in his maternal grandfather and father’s footsteps. He hopes to one day be able to use his American education and implement constitutional laws in Congo.

Shortly after coming to America, Kipuke got into some legal trouble that resulted in a short 4-month stay in jail. Barely 18, Kipuke was forced to re-evaluate his life.

“I (came) from (being) that guy in high school that (everyone’s) parents told their son ‘Oh, stay away from him,’” Kipuke said.

He went from being a possible police academy candidate, riding along with officers, to cuffed and put in the back seat by the same officers that saw a bright future in him. “(It) changed me a lot,” he said. “I saw everything from a different perspective.”

Now age 22, Kipuke has embarked on the beginning of his political career as vice president of the ASB senate.

Kipuke’s parents, who live and work in Africa, want him to achieve a bachelor’s degree before he returns home to Africa.

According to Kipuke, his family is well known for their activism and ministry in Africa. “There aren’t that many Omba Kipukes,” Kipuke said.

One lesson Kipuke has learned throughout his life is to always have passion. “I believe you have to be a versatile leader,” he stated with passion, “If you’re not fighting for anything, you’re dying for nothing.”

The two met by luck. Kipuke’s relentless curiosity for a girl in the Student Services Center led the two to cross paths. “When he found out about the problems (in senate), that’s when he started to harass me (about senate),” said Robey.
Robey saw “how aggressive he was about changing things.” At that point she convinced him to go for a higher position, her vice president.

Robey and Kipuke made ARC history. This is the first time in ARC ASB senate history that there has ever been an African-American in both president and vice president, according to Robey. Respectfully, ARC has not kept a record of the nationalities of the previous ASB senate members. Currently there is a list being compiled of all past senate members; when finished the list will help to establish the truth.

“You’ve got two minutes,” Kipuke said as he monitored her time schedule. Robey looked at him with a smile on her face and as she shook her head in laughter she said, “We’re like brother and sister.”

Not too giant a leap for mankind

Be the first to comment on "Determined and Diverse"