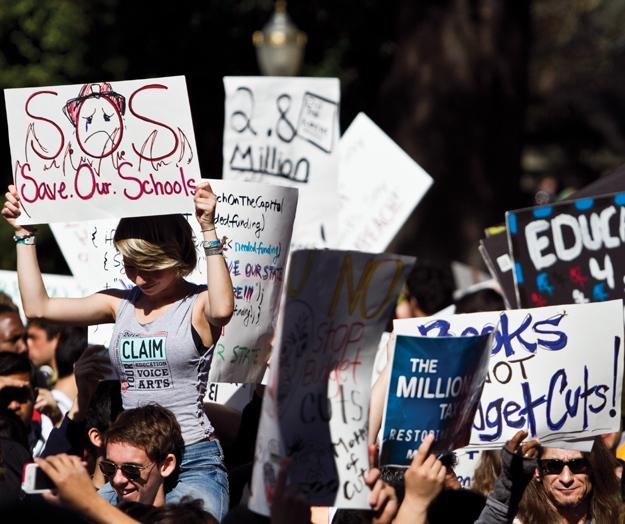 Protesters gathered on the Capitol steps in Downtown Sacramento on March 5th for the annual March in March protest.

Thousands of students from California State Universities, Universities of California, and California Community Colleges descended upon the State Capitol on March 5 for the 2012 March in March. This year’s supporters even included some high school student activists whose hopes were to be able to afford higher education within the next few years. Hundreds of demonstrators from the Occupy movement also gathered at the Capitol with their own demands.

Joshua Hernandez, a first semester student at American River College, participated in the March in March rally because he “believes in the cause.”

March in March is a student and faculty rally to protest budget cuts and the escalating cost of college. According to Richael Young, operator of the “I Will March” Web site and a student advocate, the first March in March took place in 2003 after it had been announced that fees would increase from $18 to $26 per unit. Over 10,000 community college students, faculty, and staff marched in Sacramento that year.

The second rally in 2009 was orchestrated entirely by students to protest the tripling of fees from $20 to $60 per unit. Despite only 5,000 students participating in the rally, fees increased by only 30 percent. Young believed “that those advocacy efforts had a direct impact on reducing the damage.”

Many wonder, why March? According to Young, it is the perfect opportunity for change because it is after the governor publicly releases a proposed budget, but before he releases his May revisions, giving students the opportunity to provoke some change and make their needs heard.

At the Capitol on Monday, government relations chair for the Student Center of California Community Colleges, George Estutia Jr., spoke of three prominent pieces of legislature in Gov. Jerry Brown’s proposed budget. The majority of students were in favor of the first two proposals, middle class scholarships and Open Education Resources (see “Steinberg”). The third legislature discussed a capping of the Board of Governors fee waiver. Many students “have firmly stated (their) position of being against — completely against — any cap of the BOG,” Estutia said.

American River College’s senator, Aaron Steinbach, was also against capping the BOG fee waiver, and heard that “they (were) trying to get rid of the BOG program altogether.”

Despite being loud and large, it was still a peaceful demonstration. Police surrounded the Capitol on all sides making sure everyone was under control. “I just want to make sure we have a very peaceful protest,” said Officer Andrew Hill. “This is their first amendment right; we are making sure that they exercise that right legally,” he said as he confiscated a stick from a homemade flag that was too long. Anything that could be used as a weapon was not allowed. Later that evening, however, arrests were made on 68 protesters who refused to leave the Capitol.

Although the majority of those who came were united in their passion of and for higher education for themselves and generations to come, there were many different groups of protesters at the Capitol. March in March isn’t the only way to protest against budget cuts. Young states that “advocacy doesn’t end when we wash our face paint off … the real legwork comes with meeting with our representatives in their local offices and contacting them regularly with positions on budget and legislative proposals.”