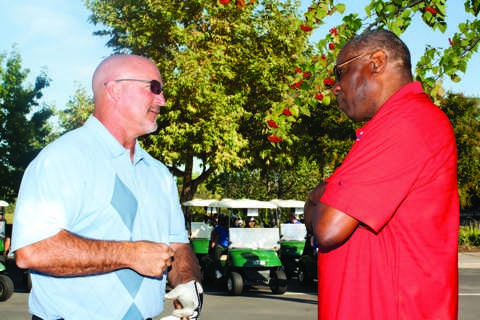 Despite never playing a round of golf in his life, Dusty Baker has hit a hole-in-one with the American River College’s athletic department.

“I don’t even play golf. But I know the awareness it can raise,” Baker said, the former two-time all-star with the Los Angeles Dodgers, and the current manager for the Cincinnati Reds. Baker also attended ARC in 1967, but did not play baseball for the Beavers.

The SASC assists student-athletes in achieving their academic and athletic goals by providing them with services in academic counseling and assistance in career planning and guidance, according to the Web site.

Along with Baker, former Sacramento Kings player Bobby Jackson was also on hand for the second year in a row to help raise money and awareness for the SASC.

“I love being here and trying to make a change in the community,” Jackson said. Jackson’s foursome in the tournament won for the second straight year.

Held on a seasonably warm and sunny October day, this light-hearted event where friends of Baker, along with staff from all ranks at ARC, helped raise money for the center that gives back to student-athletes at ARC.

Baker has many other family members who have attended ARC, and has a nephew and a niece who are current students.

“(ARC) has been in our family for a long time,” Baker said.

The date for the event this year was not set in stone because of Baker’s profession. The Reds could still be playing baseball, as the St. Louis Cardinals and the Texas Rangers played game two of the World Series the night before.

Also on hand at the event as players was ARC President David Viar, Athletic Director Jean Snuggs and head football coach Jerry Haflich—among others.
While on the driving range at last year’s event, Halfich was hit by a golf ball. So when he headed to the range this year, he was given, in a humorous context, a mask-less football helmet to protect his head.

Baker and Frankie Johnson, student personnel assistant at ARC, both expressed the support that the tournament has led to the campus. Johnson has been the lead organizer for the tournament, and said she was quite pleased with the turnout, despite the numbers being down from last year.

“Were we pleased with the numbers? Yeah,” Johnson said.  Johnson also added that the annual tournament will continue until there is no longer a need for it.

Petri Byrd, the bailiff from Judge Judy and an Elk Grove resident who played in the tournament for the second straight year, added, “Anything that gives an opportunity for our youth to achieve their goals academically, I’m in for.”