311 dials in an indecent performance 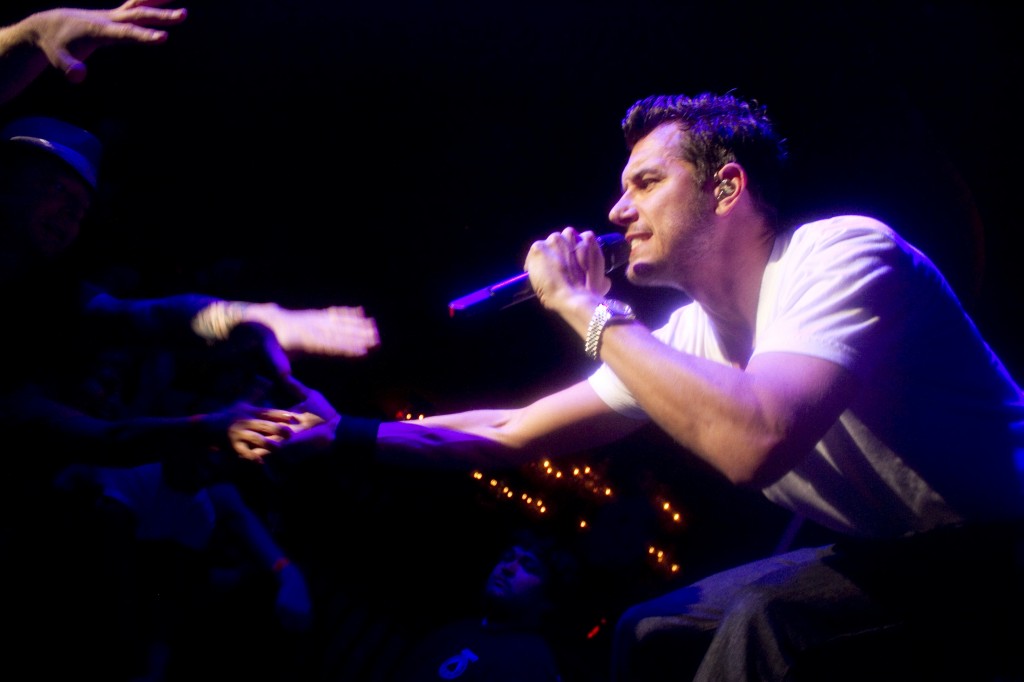 311 lead singer Nick Hexum reaches out to a sold-out crowd on March 7 but fails to connect.

The alternative funk rock band, 311 (pronounced three-eleven), played Sacramento’s Ace of Spades on March 7 to a sold-out crowd spending a mere 90 minutes performing a 23-song set that was an “ugly disaster,” to put it in terms that 311’s aging fan base can easily identify with.

The five-member band formed in 1988 in the heart of the mid-west; Omaha, Neb. After releasing demos and hammering out a sound that infused hard punk rock with reggae and funk, 311 released their self-titled album in 1995 that produced three hugely successful singles compelling 3 million people to purchase the record that put 311 in the coveted amber spotlight cast by instantaneous fame.

The band’s second song of the evening, “Prisoner,” summed up the evening for me as I navigated the smoke-filled club anxiously waiting to hear at least one of my favorite songs.
Is that too much to ask from a band that has a combined 23 albums and DVDs (the sum of which have sold over 8.5 million units in the United States)?

Past performances from 311, comprised of vocalist Nick Hexum, rapper/disc jockey S.A. Martinez, bassist P-Nut, guitarist Tim Mahoney and drummer Chad Sexton, have all been head-bangingly energetic and engaging.
This particular evening, Hexum and company choked out a concert that was uninspired and just “Plain” (a cut off of 1993’s album “Music”).

All right, now that’s enough of using their song titles as adjectives for the purpose of this critique, I promise.

Do realize though that with the exception of a couple of crowd-pleasers, every other song performed this evening was recorded pre-1995 when 311 was just a band earning college credits by winning over young adults who really enjoyed their “Grassroots” (Damn, there I go again. Or wait – they didn’t play “Grassroots” so I get a pass).

The interaction between Hexum and Martinez during “Down” invoked a breath of fresh air into the set while simultaneously reminding me of why this band has been a consistent live draw for close to 25 years.

At their best, 311 employs a unique style of music that incorporates reggae (a decade before you would listen to Shaggy claim “It Wasn’t Me” for a summer), rap-rock (Linkin Park has since perfected this genre but Chester Bennington was years away from creating “Hybrid Theory” while Martinez was inserting his vigorous rapping into “Down” and “All Mixed Up”), energy (amber would be its color — acts like Jason Mraz and Jack Johnson continue to try and emulate it but Hexum’s ethereal voice still is amongst rock’s highest echelon) and balladry (alternative punk bands didn’t write slower melody jams like “Amber” or “Love Song,” a remarkable cover of “The Cure’s hit, before 311 created a fan base who devoured these grooves).

On stage, the band appeared tired and weary throughout the evening’s set. That, I’ll concede, is understandable to a certain extent as they’ve been out on the road since they released their last album “Universal Pulse” in July 2011.
That being said, 311 broke my “bread and butter” rule of concert going. They didn’t play their hits.

The band certainly had their moments (the bread), yet for all but the most die-hard 311 fans the experience was unbuttered toast.

“My Stoney Baby” could have had assembled a more fan-friendly mix of songs that would have left “Offbeat Bare Ass” back in 1994 where it belongs (there I go breaking my promise to not utilize 311 song titles to supplement my critique).
I have to admit though that a band that got their name from a police scanner code for indecent exposure can get “All Mixed Up” every once in a while. Tonight was just one of those nights.

I only hope that the recent Las Vegas crowd who paid to see 311 on 3/11 weren’t treated to as dismal and uninspired a performance as the one they played here in Sacramento.

I met many ARC students that night so all of you let me know if I’m on target or not. It’s your responsibility to let me know whether my critiques “Missed the Mark.”  Send me your feedback to [email protected] or follow me on Twitter @kingmlew – I want to hear from you.