Pauline Ghost woke up at Mercy San Juan Hospital, confused and alone after a day of binge drinking. Shortly after waking, she was told by hospital staff that she had attempted to take her own life by overdosing on sleep medication.

Ghost, an American River College student, was molested by her foster father.

She later learned that the abuse, which spanned from first to fourth grade, wasn’t limited to only her, but her foster sisters as well.

“We didn’t know about each other until we ended up all sharing a room,” Ghost said. “We all told each other about it. We got him put in prison for sixteen years.”

Ghost’s foster father was given a half-time sentence, (a lighter sentence for which eligibility is based on circumstances like prior convictions) and will be released next year.

To escape the pain the she felt from the ordeal, she turned to alcohol — A dependence which worsened at an alarming rate.

“I had a lot of emotions about it throughout the years. A lot of guilt and shame, because I wish that maybe if I said something when I was younger my sisters wouldn’t have to gone through it,” said Ghost. “I turned to drinking a lot to help me cope with those emotions, to help numb them, because they were just like very intense. I felt like I let my sisters down.”

Leading up to her suicide attempt, Ghost’s struggle with addiction left her with a string of DUI’s and a drunk in public charge, which she shrugged off at the time. She also cut friends out of her life, eventually isolating herself.

She had one focus: To numb her emotions.

But the day she woke up in the hospital, the only thing she felt was lucky to be alive.

“It’s very scary that all of that could have been taken away,” Ghost said. “I’m happy that I’m able to be here today.”

Hines, who was featured in the documentary “The Bridge,” which focuses on those who take their lives jumping from the Golden Gate Bridge in San Francisco, realized the instant he left the bridge that he didn’t want to die.

After this realization, Hines, who has been diagnosed as bipolar, repositioned himself to land in the water feet first. The effort saved his life, but the fall broke both of his legs, his sternum, and lacerated him internally.

The Golden Gate Bridge is 225 feet from the deck to the water. Those who take their lives jumping from the bridge fall at a speed of between 75 to 80 miles per hour, and only two percent survive the fall.

For Hines, who was diagnosed as bipolar, his improbable survival was the first step on his path to recovery.

According to the National Institute of Mental Health, for every suicide death, there are 25 suicide attempts.

Live Through This, a website that features portraits of suicide attempt survivors along with their stories, is intended to raise awareness and give a face to the issue, according to the site’s founder, Dese’Rae Stage.

“I started Googling (suicide attempt survivors),” Stage said. “I didn’t know what words to use. I noticed what I did find were statistics. Really a dehumanizing thing … We didn’t have any faces.”

When beginning her project, she had initially tried using Craigslist to reach out to survivors, but said that all of her posts were removed.

She believes it’s because they contained the word “suicide.”

Stage has common ground with her subjects. She attempted suicide at 23, after a long history of mental illness coupled with being abused by her girlfriend.

“It was like an emotional pressure cooker,” Stage said. “I’d been suicidal for two years, (and) there was this catalyst — I just couldn’t deal with any of it anymore.”

For Stage, Ghost and Hines, survival brought with it harsh confrontations. While the underlying issues may have remained, each of them immediately decided to take charge of their lives and mental health. 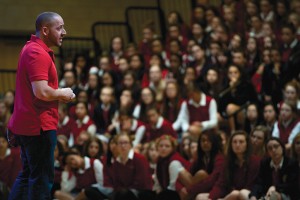 Along with the shift in outlook, survival also brings a degree of stigma. In addition to what Hines calls “assumptions and misconceptions” about a survivors’ motives, attempting suicide was historically illegal, and survivors may still be excommunicated by some churches — Facts which make finding acceptance and support difficult for some.

“Historically, suicide attempt survivors, in particular, have spoken under conditions of anonymity in order to save them from being discriminated against. The silence and shame created in that act are dangerous,” the site states. “Live Through This encourages survivors to own their experiences publicly — using both their full names and likenesses — and thereby works to strip the issue of anonymity and raise awareness by simply talking about it.”

One of Stage’s Live Through This subjects, Paolo Sambrano, wrote Bi-Poseur, a one-man show partly about his experience as a survivor, which was directed by notable comedian W. Kamau Bell.

“My dad used to get mad at me, because he would say I was too open about it, but I never had a sense of shame about it,” said Sambrano.

Some of Ghost’s family members had a similar sentiment.

Ghost, the first in her family to attend college, is now majoring in psychology. She also regularly attends alcohol dependency meetings and therapy at the Native American Health Center.

For her, talking about it is a part of the healing process.

“My goal is to be able to talk about it without my voice cracking,” she said. “I try to talk about my past, and be more open. It’s something I have to do.”