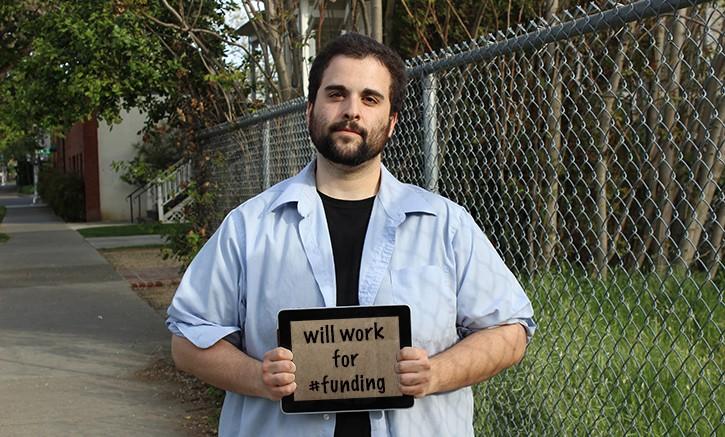 Stewart Ludwig was down on his luck. After a long stretch of unemployment, the ARC theater major hadn’t been able to pay rent for three months. He had noticed friends donating to the crowdfunding efforts of fellow theater students traveling to ACTF, a theater arts conference.

“So I thought, hey, maybe I could get those same friends that are reaching out to them to reach out to me to help pay my rent,” Ludwig said.

“Help Stewart Not Be Homeless,” his GoFundMe.com campaign, was launched soon after.

“It’s kind of like a why-not thing,” Ludwig explained.

Ludwig wasn’t the first, nor will he be the last, to attempt using the crowdfunding trend to finance his life.

Since the unveiling of crowd funding websites GoFundMe and Kickstarter in the late aughts, the act of begging strangers for money has become less based in securing the basic essentials needed for survival by those less fortunate, and more a trendy way to fleece friends and family members into supporting your lifestyle and ambitions.

For the unfamiliar, online crowdfunding is the act of reaching out to the wide-open world of the internet in order to raise funds for a multitude of things, including personal projects, films and business start-ups. This is usually accomplished by setting a “goal” amount that must be reached to consider the campaign successful.

It’s been used by filmmakers, tech startups, charities, and one guy who went on a quest to find out what homemade potato salad is like. But most often, we encounter crowdfunding projects scrolling through our Facebook feed, as our friends and relatives reach out for inanities like help with rent, a new bicycle, paying off parking tickets, and more examples of middle class spanging.

Robbie Rickgauer, a professor of psychology at Sacramento State, notes that the online aspect of crowdfunding changes fundamental aspects of begging.

“We are programmed to avoid behaviors that bring shame. Begging for handouts is one of those behaviors,” said Rickgauer. “However, by begging on a crowdfunding website, you are changing a few elements that makes it easier to beg.

“For one, you don’t have to humble yourself to potentially have a face-to-face rejection. The internet puts a distance between the potential funder and the beneficiary. Also, you only have to beg once. Each time we beg, we feel stress by being at the mercy of someone who may be our savior or may spit on us. The plea is posted online and then left to be funded. It’s like having a begging robot that has your face panhandle for you. Finally, the funder is a stranger who is less likely to hold this shame over you for a long time. This is easier than begging parents who would be much more likely to bring this up every Thanksgiving when the beggar comes home to visit.”

“I’ve seen it attempted by people, in the past, who’ve come off a bit more like they were begging and I saw how ineffective the approach was … people need to feel like they’re getting something for their money.”

De Mola turned to crowd funding to finance a trip to Italy this summer to participate in the Salerno World Conference, an event put together by 100 Thousand Poets For Change, a non-profit group based in the United States. 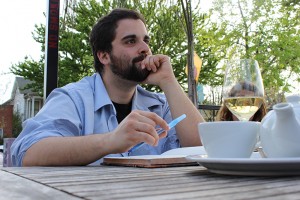 De Mola, who used a GoFundMe campaign to track his progress raising money for a trip to a poetry conference in Italy, has strong feelings on the use of crowdfunding, referring to some as “give me money schemes.” De Mola offered to do odd jobs in exchange for donations to the campaign, and said his personal favorite was doing 16 loads of laundry: “Literally all the laundry they had.”

De Mola has strong feelings on the use of crowdfunding — his campaign description lambasts what he calls “give me money schemes.”

“I wasn’t looking to get by on donations. I wanted to work for it, do odds-and-ends jobs for people,” de Mola said.

And he has worked.

De Mola said that most of the odd jobs involve yard work. His personal favorite job, however, was doing 16 loads of laundry: “Literally all the laundry they had.”

De Mola originally intended the GoFundMe page to serve as a tracker for how much money he’s made doing odd jobs.

“Typically, it’s used for people with their proverbial hands-out, hoping someone will fund them for free,” de Mola said.

DeMola, however, is an exception to the rule.

“I’m not hating on anyone who decides they want to start a campaign and run it how they choose. But there have been several times, over the years, where I’ve seen GoFundMe sites go up, and these people aren’t offering anything in return. They’re just saying “Give me money.” And they’ll get some contributors, but I also see how frustrated they get when the money stops coming in, far short of their goal. I see how frustrated their friends get, having to deal with their friend asking them why they aren’t more supportive,” DeMola said.

Rickgauer sees the cultural nuances behind this.

“There is a certain shame that comes from being what is referred to as a “free rider” — someone  who benefits from someone else’s work while contributing little or none of their own. There is no culture in the world that gladly accepts free riders,” Rickgauer said.

“Naturally, if such a culture ever existed, it would run itself into the ground and go extinct.”

Be the first to comment on "Something for nothing: The rise of crowdfunding"