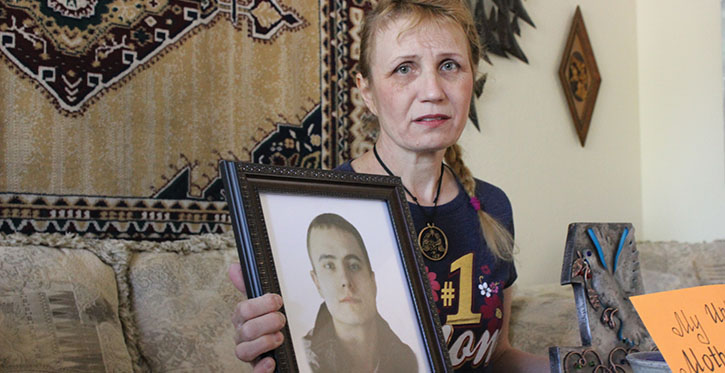 Standing alone in a courthouse hallway and denied entrance into her son’s murder trial as the case was nearing its end, Larisa Postelnyak said she did not know what to do.

That is when the Ukranian-born artist said she remembered that she had colored paper, a sharpie and adhesive tape, the tools of her trade, in her bag.

“I was thinking ‘I’m going to write the sign and put tape over my mouth,’” said Larisa. “I thought that if (the bailiff) could see, he would be ashamed about kicking me out.”

Spectators in a courtroom are expected to stay silent. Larisa said she was removed from the trial the previous day because she was translating the proceedings for her 70-year-old mother.

They are both immigrants from the Ukraine, a former Soviet republic west of Russia.

“She only knows three words of English,” said Larisa. “I ask Pavel’s attorney. He told (me) this is his case, not mine. He said Pavel doesn’t need an interpreter and I said ‘Yes, but what about my mother and me?’”

Larisa said the trial frightened her because she does not understand the “court level language” of the American judicial system.

“I feel like I’m (a) stupid person. English makes me feel this way,” said Larisa. “I was in English school for four years and I take two years in America.”

“I don’t understand the rules too much. I don’t really know what you can and can’t do because of the language barrier.”

The day after Larisa was denied entrance into the courtroom, her son Pavel, 24, was convicted in the first-degree murder of Anthony Johnson, 28. 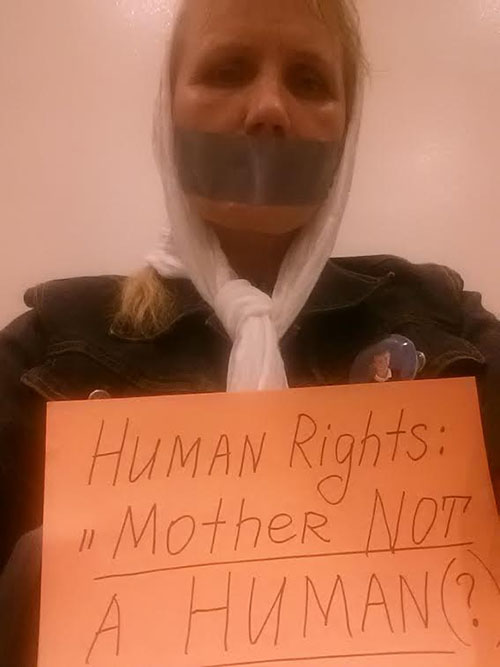 Larisa Postelnyak covers her mouth with duct tape as she demonstrates outside of the jailhouse courtroom while, inside, her son Pavel Postelnyak is convicted of first-degree murder on March 19. (Photo courtesy of Larisa Postelnyak)

Larisa found out about the verdict from friends of hers who were in the courtroom.

When asked how she felt about the conviction, Larisa said “I don’t know, I don’t know … My soul was ripping apart. I just didn’t know what to do. Was it him or not? I started to cry.”

Pavel’s father Aleksandar had few words about his son’s conviction.

“I didn’t sleep, didn’t eat. What else can I say?” said Aleksandar.

Added Larisa: “I don’t feel anything. I’m just crying and shaking. I just stay on my legs and pray … He’s not a monster. Maybe we still have a chance for him to come out alive when I’m alive.”

Pavel worked with Johnson at Democracy Resources, a company that gathers signatures for petitions.

Pavel had previously been arrested for slapping a student on the American River College campus while he was gathering signatures.

“(The illness) makes him listen to voices,” said Larisa.

Pavel’s defense attorney, Robert Saria, said that translators are only provided for the defendant or witnesses in a criminal case.

“In the beginning of the trial, she (Larisa) wanted the state to essentially pay for somebody else to sit in the courtroom and translate what was going on,” said Saria. “The state provides translators free of charge for defendants and witnesses.”

Saria said that the rule against speaking in court is intended to allow the court reporter to hear properly and to prevent the tainting of the jury.

“You can’t say anything,” said Saria. “Even nodding your head will result in being removed from the courtroom.”

Larisa said that she knew she was not allowed to talk, but that she felt compelled to tell her mother that she believed the prosecutor was lying.

“(The prosecutor said) (Pavel) is a monster. In the court he looked like a bad guy. He looked like a monster,” said Larisa. “They don’t give chance for me to talk about good things.”

Saria said that Larisa’s demonstration in the hallway the next day frustrated his ability to defend Pavel.

“She has a First Amendment right to protest,” said Saria. “The time, place and manner was not appropriate. She was very loudly wailing and praying in front of the room. It didn’t help defend her son at all.”

Larisa said she first came to the United States on Feb. 14, 1995, a day her family has traditionally celebrated with a party each year, except this year.

“We didn’t celebrate because my kid is in the jail,” said Larisa.

Larisa said her family came to America to be more free to practice their Christian faith.

“My father was a dissident,” said Larisa. “I remember the police came in to my mother’s house and the found a Bible and they said it was a political case because it was made not in Moscow but in Washington state. They were looking for something to put him away.”

After moving to Sacramento, Larisa became active in the Slavic community. She works with a small company that teaches art called God’s Peacemakers.

“Some people are confused about letting me teach children because they think I’m (a) horrible mother.”

Larisa says she visited her son recently and that he said he doesn’t want to talk to her again because she told reporters he was mentally ill.

“I pray about him (Anthony Johnson), about the judge,” said Larisa. “I told Jesus, ‘Please bless them and give them a good heart. I didn’t see it, only you see what’s going on.’”

Be the first to comment on "A mother silenced: A Ukrainian immigrant struggles to follow her son’s murder trial"