Review: ARC theatre department returns to the stage with a humorous act

For the first time since fall 2019, the ARC theatre department returns to the stage to perform William Shakespeare’s “Comedy of Errors” 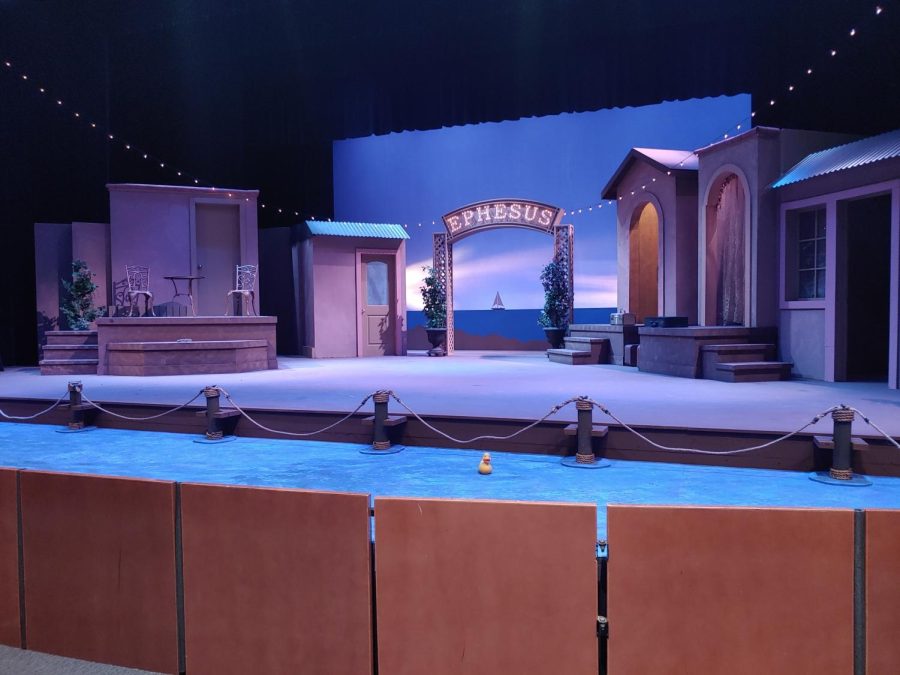 The American River College theatre department performs "Comedy of Errors" by William Shakespeare. The story follows Antipholus and Dromio of Syracuse travelling to Ephesus in search of their long lost twins. (Photo by Samuel Berg)

The American River College Department of Theatre Arts & Film’s production of William Shakespeare’s “Comedy of Errors,” which opened  Oct. 15, is the first show the department has performed in two years.

The play was directed by Jason Long, ARC Fine & Applied Arts professor and has a run time of one hour and 15 minutes.

“Comedy of Errors” is a story of mistaken identity, laughter and wackiness,” Long said in a press release.

Unlike his other work, in this play, Shakespeare focuses on the themes of coincidence rather than conflict. With many of Shakespeare’s plays dealing with romance, “Comedy of Errors” goes in a different direction and focuses on self-identity. It was a nice change of pace for the theatre department who had not performed on stage since 2019.

From Antipholus of Ephesus’ wife Adriana mistaking her husband for his twin brother, not an exchange of gold between goldsmith Angelo and Dromio of Syracuse, this play certainly has its moments of coincidence.

There were many more moments of hilarious confusion during the play, especially at the end where the pairs of twins finally meet face-to-face for the first time since their split when they were children. It all comes to a happy ending with both sets of twins reconnecting and Ephesus finally understanding what had been happening all along.

The cast does a great job of giving a light-hearted performance that compliments the Shakespeare dialogue throughout. Antipholus and Dromio of Syracuse, acted by Samuel Firl and Lili Young, carry lots of stage time that keeps the audience engaged throughout the performance. Other sets of twins played by Zack Tucker and Tayrn Cagley also help bring great dynamics of identical twins to each other.

To keep the audience and cast members safe from COVID-19, the cast wore masks throughout the play. The dialogue and physical expression by the cast had to be emphasized because of the lack of facial expression with the masks on, but once the story is underway and the plot develops, the plot becomes easier to follow.

The humor throughout “Comedy of Errors” is something that audiences of all ages can enjoy. Having a fun and more bizarre play talking about two sets of identical twins that have the same names that are in the same place at the same time was a great way of welcoming friends and family back to the theater after two years. The elements of coincidences and confusion in the play had the audience laughing throughout the whole show.

Performing a Shakespeare play is not an easy task, especially after a two-year hiatus. But the ARC theatre department did a great job at working hard to put together an enjoyable production for audience members to watch.

For information about remaining show dates and where to purchase tickets, visit the ARC Theatre website here.