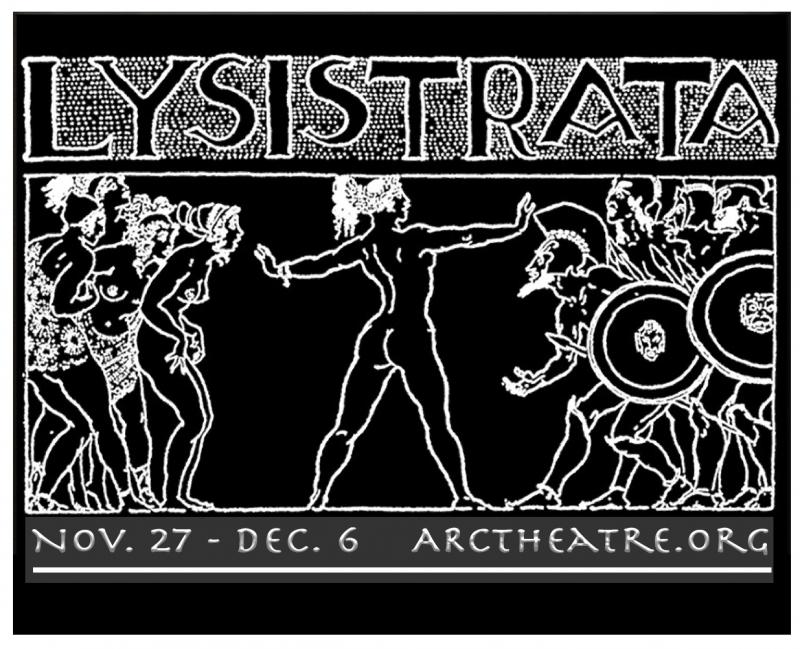 Though “Lysistrata” ran for two weekends alone, it was another example of ARC Theatre rising to the challenges presented by the pandemic to put on a relevant and timely piece of comedy. (Photo art courtesy of ARC Theatre)

When I sat down to watch “Lysistrata” performed by the American River Theatre on Friday, Dec. 4, I did not expect a fight over moving Zoom windows performed by nude puppets with breasts and penises exposed. But that is one part of what I got from this earnest comedy production, and I believe it had the intended effect: I laughed. We’re talking full-belly, loud chortling at my laptop display, earning a concerned question from my family in another room:

“Are you all right?”

Pandemic restrictions forced ARC Theatre to convey Aristophanes’ Greek play from 411 BC over a Zoom stream in 2020. The sets were in the individual actors’ homes, their costumes crafted from bed sheets and pillowcases, according to the theater program. Scenes that demanded nudity were handled with puppets, some of which were tied to the actor’s heads.

Director Pamela Downs’ production of “Lysistrata” rams against these constraints, but ultimately succeeds in providing a good time.

“Lysistrata” aims for a similar sweet spot struck by other serious comedies, like 2015’s “The Big Short” for example. The subject matter it discusses is based in reality, but “Lysistrata” offers a fantasy, idealized solution to a generation-spanning war, where “The Big Short” ends on a dour, heart-breaking note. The former allows the comedy to have its happy ending, the latter tells you that the bad things it discusses affected millions and will likely and inevitably happen again.

Continuing a modern trend of performances of “Lysistrata,” ARC Theatre’s production is decidedly feminist and anti-war. In a nut, our heroine Lysistrata, played by Jude Owen, organizes a sexual resistance to Athens’ involvement with the ongoing Peloponnesian War versus Sparta, assisted by other women whose husbands have been away for weeks, months, even years, fighting an ultimately fruitless war. By withholding sex from their men, the timely seizure of the state treasury by the old women, coupled with their successful defense against the old men of Athens who come to break their siege with fire, the hope is for the conflict to come to an end.

From a purely performance standpoint, ARC Theatre’s actors turn in a strong effort. Jude Owen’s turn as the titular Lysistrata brings the show a necessary and strong central figure. She portrayed an extremely believable leader to what is depicted as a rebellion formed on the shakiest of ground.

The lead representative of these questionably dedicated women is Calonice, played by Liesel Hanson, and she bounces well off of Owen’s Lysistrata. Their opening dialogue as the show’s curtain raised really sets the tone. Lysistrata is focused and committed. Calonice is too to an extent, but is clearly more open to the temptations that erode at the will of other women involved in the rebellion. It’s a great dynamic, and the actresses really sell it.

Another surprisingly entertaining role in the show is that of Cinesias, played by Kevin Nolan. Cinesias is ultimately the representative of all the husbands and lovers who are directly affected by the sex strike, and Nolan is hilarious at playing up his ‘suffering’ to comical extremes.

Credit should be given to the play’s translated script. Despite the age of the work, there was clearly a lot of effort put into bringing the dialogue into the present, and it’s apparent throughout the whole show. It felt surprisingly modern throughout, and I think that helped the humor land for me.

Also worth mentioning was the use of puppets, clothed or otherwise. Puppet designer Kimberlee Wilson’s works were a regular source of laughs just from their appearance alone. The puppets were also an excellent way to expand on a cast that was unfortunately reduced in size due to the pandemic restrictions.

Where the show suffers is primarily due to the limitations of the streaming format and the distance between actors. The technical staff behind the presentation did its level best, scaling individual video feeds of the actors on their personal sets as needed, sliding them around the screen to help establish scenes. The actors also work within these limitations, such as the moments where physical violence or love need to be expressed.

However, there were occasions where scene changes were not always as clear as necessary. At other times so many actors were on stream simultaneously, their view windows would shrink to the point where it was difficult to make out expressions or action. Earlier this semester, during ARC Theatre’s production of “Fires in the Mirror,” the individual focus on monologues made it much easier to experience the work of each individual actor, whereas with “Lysistrata,” there were times where some actors were “lost” when their stream windows shrank and moved around.

Ultimately, these technical problems didn’t get in the way of my enjoyment of the show. If anything they made me wish I could see this cast and crew come together on a physical stage and perform “Lysistrata” in front of a live audience, puppets included.

While not as clean as the previous online production from the ARC Theatre, “Lysistrata” delivered laughs and remains relevant for the times we live in today. The United States has been at war overseas, to varying extents, for nearly two decades straight. Wouldn’t it be nice if we could be convinced so easily to lay down our own arms as Aristophanes’ idealized Athens?