Review: ARC Theatre triumphs with “Fires in the Mirror” 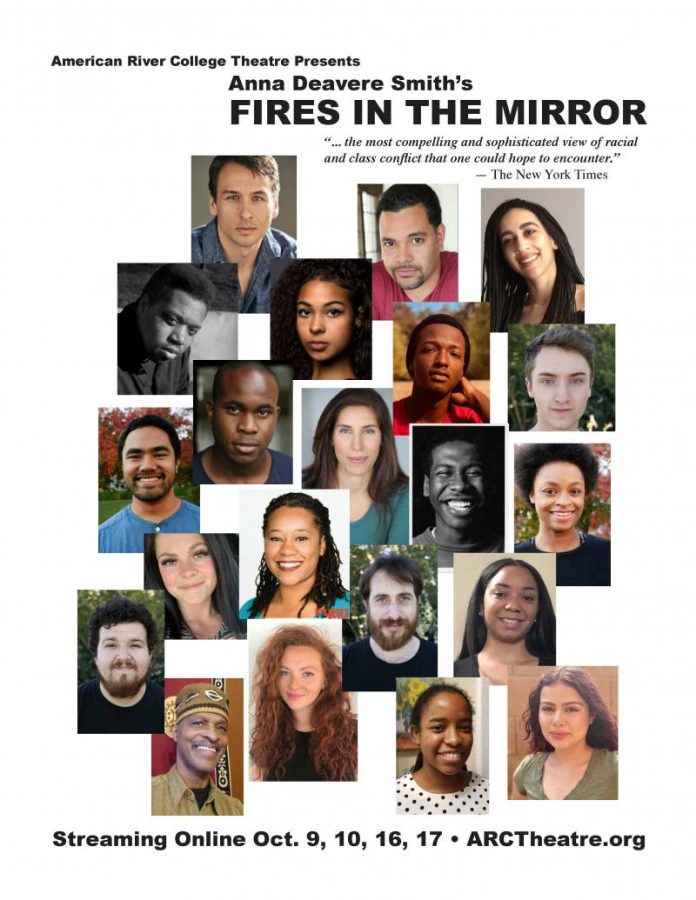 With the ongoing Black Lives Matter protests, there is possibly no play more fitting or necessary for 2020 than “Fires in the Mirror”. Though the show ended on Oct. 18, ARC Theatre is hoping to stream the show again later this year. (Photo courtesy of ARC Theatre)

“Fires in the Mirror: Crown Heights, Brooklyn and Other Identities” premiered at The Public Theater in New York City on May 1, 1992. Now, more than two decades later the American River College Theatre has chosen to adapt this one-woman show into a series of 29 powerful monologues.

Written and originally performed solely by Anna Deavere Smith, the play focuses on various accounts of the August 1991 Crown Heights riot, a clash between Black Americans and the local Jewish population.

The three day riot was sparked by the death of 7-year-old Gavin Cato, the son of Guyanese immigrants. While riding a bicycle with his sister, Angela, the two were struck by a station wagon in a motorcade escorting Rabbi Menachem Mendel Schneerson. Gavin was pronounced dead at a hospital, while his sister survived with severe injuries.

The next day, a group of Black men accosted Yankel Rosenbaum, a Jewish 29-year-old Australian national visiting the United States for research related to his doctorate, and beat him severely. One of his attackers, 16-year-old Lemrick Nelson, stabbed him during the attack. Yankel later died at a local hospital after doctors failed to identify the stab wound in his chest.

In crafting this play, Smith interviewed dozens of people connected to the riot. Her goal was to examine the unique racial and religious differences between the larger black community, and the smaller Orthodox Jewish Lubavitch community that shared the neighborhood.

To say that “Fires in the Mirror” is relevant in 2020 almost undersells its importance as a work of its time, and arguably of the riot itself. If there was ever time to watch a show that reminds us of the racial and religious tensions that have led to violence in this country, it is this year.

ARC Theatre director Sam Williams has put together a strong ensemble cast that defies the limitations of distance and separate time zones, featuring talent currently enrolled at the college as well as ARC Theatre alumni who have moved on to pursue acting careers. A combination of pandemic restrictions and sheer distance from the campus required the 21 actors to record their work from across the country in four different states: California, New York, Oregon and Pennsylvania. The result was nothing short of fantastic.

Also impressive was the set design, despite the fact each monologue was filmed away from a theater stage without access to the same resources of an in-person show. Throughout the two hour run time, there is a sense that every actor in the production understood that they faced technical challenges they would need to creatively solve on their end.

It’s also clear that the team supporting the production offered them the necessary guidance to meet these challenges head on. Particularly notable for their sets were actors Omar Huerta and Fetalaiga Faga, the former making creative use of a mirror during his monologue, the latter filming his second monologue of the show from inside a parked car.

Because each monologue focuses on a single person, the audience is allowed far more intimacy with their performances. It made the physical acting more important than the projection of voice through sheer volume or speakers placed throughout a theatre.

A knowing smile or the sharp inhale of breath as a father holds back his tears all came through that much clearer with the cameras placed closer than any seat in the theater. The physical performances were further enhanced by the convincing accents and dialects employed by the cast.

It is impossible to mention specific performances without feeling like I’ve missed out on acknowledging someone, such was the strength of the acting. When Angela Davis (Taylor-Alexis), lectures us on the importance of preserving our cultural heritage even as we come together with our neighbors, it feels like being in a classroom. Minister Conrad Mohammed’s (Jammy Bulaya) fiery sermon on the suffering of his people throughout history had me leaning back in my seat as he thundered from one atrocity to the next.

While this show clearly excelled during moments of high energy and anger, it is equally potent in its moments of reflection and humor. Sam Williams turns in a fantastic performance as Leonard Jeffries, weaving a gossip-laden tale of his role in the 1977 television series Roots. Joe Skipper’s turn as Norman Rosenbaum, brother to the murdered Yankel, is relatable as he shamefully recalls how he callously hadn’t thought of his parents or sibling when his wife called him home from work on that day in 1991.

Also notable in this production was the use of music to signal transitions between monologues and acts in the show. Most of the songs in this production are original, composed by Zachary Darf and David Williams. Video footage of modern day Crown Heights was also used throughout the show to help establish the setting.

“Fires in the Mirror” parallels the racial injustices of today. The voices within are often casually prejudiced, at times coming through in the same breath as legitimate grievances with those with whom they share Crown Heights, the police and medical response to the fatal car accident, and the failures of the local government to treat its citizens as equals. In 2020, these challenges remain before us all.

Americans have been marching in the streets throughout the year, pushing back against the same injustices that have gone unaddressed since those three days in 1991. In a sense, this show is a reminder that our country still has so far to go. The dry tinder waiting for the spark will not vanish overnight, or perhaps ever, unless we try to move beyond our differences.