Even a brain tumor can’t stop this music driven professor 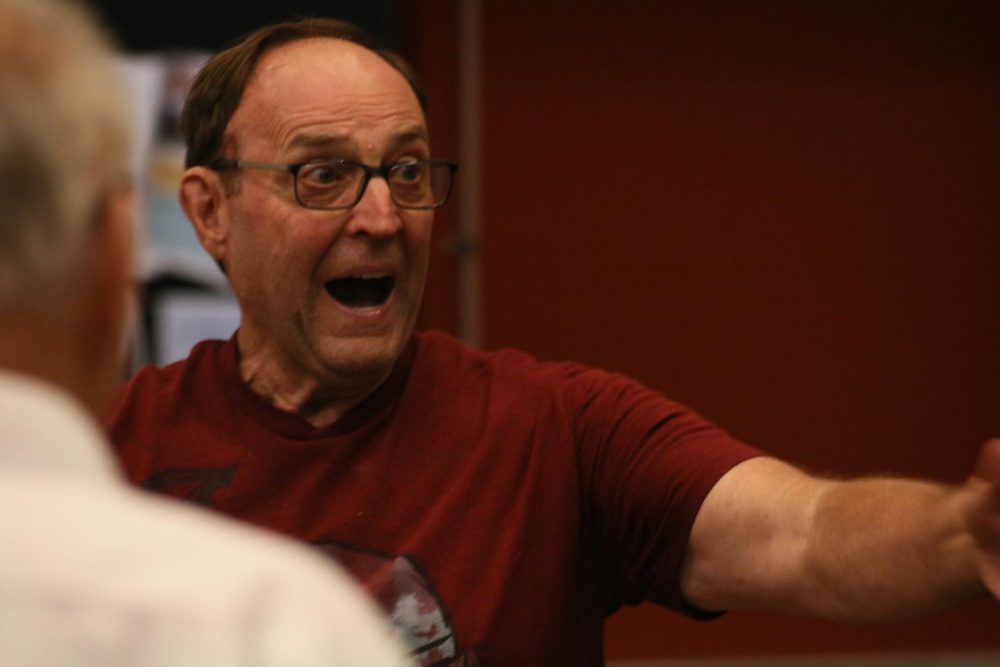 Arthur Lapierre arrived before the rest of his class to a room with walls lined with acoustic padding and a plethora of orchestral instruments and equipment pushed up to the edges. Lapierre wheeled the grand piano across the empty floor, swept the cover off and started to play. He began playing a piece, and if he hit a chord or line that suited him he flew up and down it in a warm-up exercise.

Lapierre is the director of the Advanced Vocal Jazz group at American River College. He’s been teaching jazz at the college level across the country for years, connecting with his students and pushing them to be better. He takes his job very seriously, feeling that there is a depth of learning only possible through higher education.

“College is [meant] to open your eyes and your mind to all the possibilities that are out there,” Lapierre said. “Come on, isn’t that hip?”

At the beginning of the year, Lapierre couldn’t be there to lead his group. In August he had an operation to remove a golf-ball-sized meningioma, a benign brain tumor, from his olfactory groove.

Lapierre displayed his scar that went from one ear, across his hairline, and ended at his other ear.

He says he only wishes that the rest of the symptoms were as good.

“I have no sense of taste or smell… and now that I’ve moved into this month, I have a terrible taste in my mouth, and a terrible scent. I mean it’s vile,” he said.

After a warm-up with the whole group, they started with the same piece that Lapierre had been practicing before their arrival. Soon, Lapierre was dissatisfied with their harmony, and it became clear why they meet for four-and-a-half hours on Fridays. Lapierre spent 30 minutes working them on just five words of the tune, and in just over the course of an hour they only got through nine words.

Lapierre said he first started playing guitar in rock bands starting in the seventh grade, covering the likes of Creedence Clearwater Revival and The Who. Then, he joined a southern rock group, covering the Allman Brothers and Charlie Daniels, and it needed a singer. He said he was initially reluctant, but that didn’t last.

“Once I discovered that girls like singers, I was hooked, man,” Lapierre said.

Lapierre said he had a good enough ear to play just about any instrument he picked up, but singing was his musical outlet of choice from then on. He sang his way through Fullerton College, California State University Fullerton, and CSU Long Beach, and the University of Northern Colorado.

Lapierre was a student teacher in middle schools and high schools, but quickly moved on to larger schools, like CSU Los Angeles, Rancho Santiago Community College, and CSU Long Beach. He also taught summer programs in Germany for several years, and just before coming to ARC, he taught at Berklee College of Music, one of the largest and most prestigious music schools in the country.

Lapierre has taught since he was 21, and the experience shows. With the Advanced Vocal Jazz group he said he held firm in his expectations of them, but the environment was still warm, with a greater sense of familiarity than one would expect from a group that’s been whole for only a few weeks.

Steven Frantz, the student that Lapierre went after the most that Friday, still managed to be lighthearted.

“When you get deep enough into any field you realize there’s a great art to everything,” he said.

Lapierre added that it takes integrity to become truly great at something.

“There’s a great art to planting grass, growing flowers,” he said with a smile. “I think we don’t get deep enough into hardly anything that we do… I think if we let people do what they really wanted to do, they’d be way more passionate about it, and that’s when the art really gets created.”