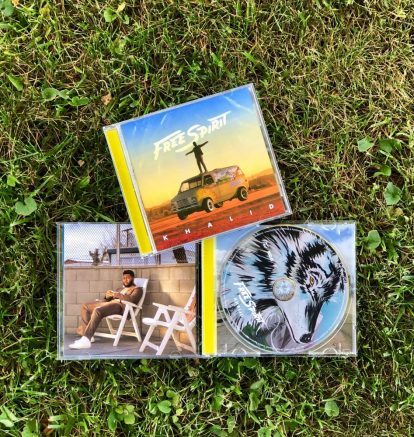 The artwork for the physical copies of Khalid’s album releases. (Photo by Makenna Roy)

Khalid’s second album “Free Spirit” debuted at number one on the Billboard 200 and iTunes charts.

For me Khalid’s second album is refreshing, he is revisiting sounds from the ‘90s that aren’t normally heard in today’s pop-centric music. On his newest album, Khalid has outdone himself and I think as an artist he will only continue to grow and solidify his sound.Along with the release of his album, Khalid created a one-night only experience for fans. On April 3 at select theaters across the world, Khalid’s fans had the opportunity to watch the short film he created, “Free Spirit.”

Made with director Emil Nava, the film explores the different aspects of life that teenagers face while growing up. From creating lasting friendship to finding love and fighting internal demons to find yourself, the film is able to link Khalid’s music to the teen experience.

At the end of the film fans had the opportunity to listen to the album in its entirety, with video commentary from Khalid on each song. “Free Spirit” is now available to the public and can be viewed on Apple Music and YouTube.

While “American Teen” was filled with songs like “Young Dumb & Broke” and “8Teen,” which encompassed the easygoing teen spirit, on his sophomore album Khalid has taken a more introspective approach.

In anticipation of the release of “Free Spirit,” fans speculated on social media what route Khalid would take with the album when it was revealed that songs “Saturday Nights” and “Better” made the album tracklist off of Khalid’s previous “Suncity” EP.

When Khalid wrote “American Teen” he was 17 and didn’t have many responsibilities. Now 21, Khalid shared in an interview with Zane Lowe, the Beats 1 host, that he is able to release music “in a completely different mind frame.”

While Khalid hasn’t strayed too far from his first album, in “Free Spirit,” he has found his voice within the lyrics of his songs. On his newest album, Khalid digs deeper into the process of self-reflection and how he deals with problems he faces.

In tracks “Self” and “Hundred” Khalid sings about his relationship with himself and the people that he chooses to surround himself with, rather than the daily struggles of a high school teenager.

On “Alive,” Khalid discusses a similar topic: making choices that can wind up leading to the wrong place. Lyrics from the song include “didn’t ask for help and now I’m lost / life comes in phases (phases)” and “Gatekeeper, can you show me more to life? Lately, I’ve been living out of spite.”

Khalid hasn’t ditched his upbeat sound all together, the album consists of tracks that give off the feeling of a carefree summer and live up to its name — Free Spirit. In “Right Back” and “Bluffin,” Khalid pays homage to the rhythm and blues and soul sounds of the ‘90s.

In addition to the release of his album Khalid announced to his fans via social media that he will kick off his Free Spirit World Tour, his first arena tour, which will begin in the United States in late June.

While Khalid is still in his early twenties, his music has already matured from that of the carefree teenager he was when “American Teen” was released to someone trying to find how to become a ‘free spirit’ in a world filled with social roles that people are supposed to fit in.

Be the first to comment on "Has Khalid found his ‘Free Spirit’?"