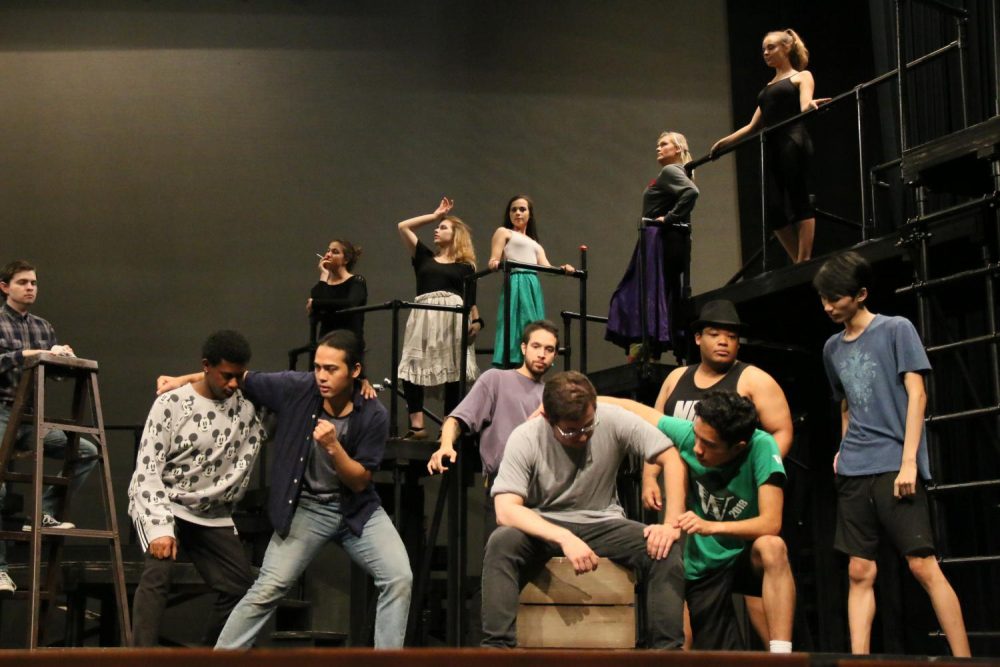 The cast of "West Side Story" pose on stage, some students atop various stage props, during rehearsals on Oct. 4, 2018. (Photo by Itzin Alpizar)

Inspired by the story of Romeo and Juliet by William Shakespeare, the American River College Theater Department will open its first production of the 2018-2019 season with the award-winning musical “West Side Story” this Friday, through Oct 28.

This is the story of an idealistic couple struggling for their love between the power battle of two teenage street gangs, the Sharks and the Jets, in a working class neighborhood in New York in the mid 1950s.

Isabella Evan, who is pursuing a musical theater certificate at ARC, plays Margarita who is part of the Sharks ensemble. She said that this story is relevant and timeless.

“[‘West Side Story’] is just not afraid to touch upon issues that we usually don’t want to talk about like racism, politics and a place for all of us,” Evan said. “It is awesome to merge such as heavy topics with such beauty in art.”

In the story, the Sharks are Puerto Rican while the Jets members are white. Tony, played by Zach Ekstedt, is a former member of the Jets and best friend of Riff, played by Brandon Wall, who is the leader of the Jets.

“I want the Jets to be the greatest, that means whatever stands in the way, I have to push it aside and defeat it,” Wall said. “In this case that is the Sharks … stopping us from being number one, so that is my main focus.”

Tony falls in love with Maria, played by Alysia Sambuca, who is the sister of Bernardo played by Isaac Williams, and leader of the Sharks.

Stage manager Corine Balmain said that the message on the show is about stances on immigration, getting along and remains relevant today.

“You have the Americans against the Puerto Ricans and they don’t want to understand each other and stand fighting over their territory,” Balmain said. “And in the midst of all of this you have someone from each side that happens to fall in love.”

The production, directed by Sam Williams, honors the 100 birth anniversary of Leonard Bernstein, who created the show’s music. It features big choreographic numbers to the rhythms of mambo and cha cha by a live orchestra conducted by Susan Hamre.

Sam Williams and Sarah Souther choreographed the show, with over 33 cast members, during the last three months to master its challenging choreographic script by Jerome Robbins, director of the 1957 original production and choreography.

“It’s a very challenging show choreography wise because the music too is very intricate, so you are going step by step versus like counts,” Souther said.

“There is so many people that contributed to this,” Souther said. “Professor Hamre has done such a killer job with the music and the orchestra sounds insane, Tracy did an incredible job with the vocals too.”

The show’s costumes, set and lights bring the streets of New York alive under the creative team of Gail Russell and Kathy Burleson, both Elly award-winners.

The Elly awards are given for outstanding achievements of community theaters and artists in the Sacramento area, according to Sacramento Regional Theatre Alliance (SARTA).

Souther said that the production has a strong team that has worked hard since July when the dance camp started.

“[The show] is going to be epic,” Souther said. “It is everything you would want to see. It is not an easy show and it is been done absolutely beautifully and the cast has just worked really hard since July.”

The show on Thursday Oct. 18 will be American Sign Language interpreted.

Performances will be at ARC’s Main Theatre located on the Theater Arts building at the corner of College Oak Drive and Myrtle Avenue, where $2 parking is available in lot D.