‘Symbols of Objects:’ Kaneko show almost a year in the making 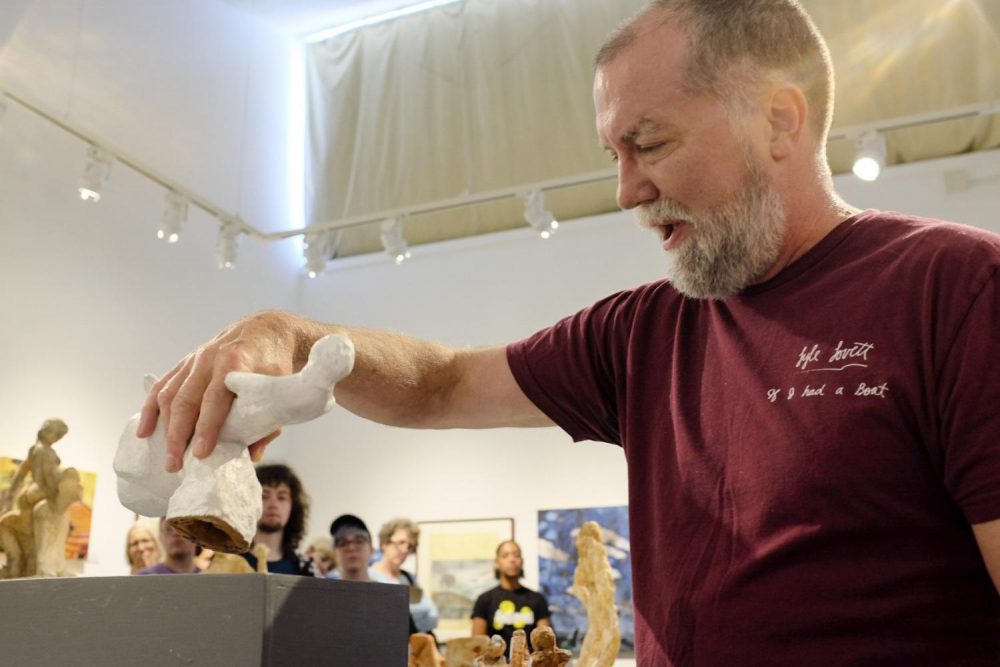 Patricia Wood entered an old machine shed barn just west of American River College. The 1000-square foot barn had a 75-foot extension cord leading from the house to light the room. “Rough as a cob” on the outside, the barn was filled with abstract landscape paintings whose bright colors were a stark contrast to the old shed; figurative sculptures that twist and turn with the flow of the clay and plaster were scattered around the room.

“Why don’t you bring in some of those?” Wood said, referring to the sculptures made by the imaginative and expressive Craig Smith. Patricia Wood is the director at Kaneko Gallery where she’d been trying for about a year to set up a show for Smith.

Smith described the process of creating one of his paintings from observations to the highly abstracted final product.

“All the paintings are based in observation of reality but then they are changed or adjusted in order to have some visual, expressive, characteristic or flavor,” Smith said. “The sculptures are largely invented.”

The oil paintings are made with thick lines and garish colors, that are reminiscent of a Max Beckmann piece, that crisscross the canvas and blend into one another; they hardly resemble the observational studies Smith made using watercolor that hang next to the piece.

A combination of oil paintings, watercolors, clay and plaster sculptures, and oil pastel drawings made on old maps are on display. The work is largely abstract, relying on the color and expressive quality of the lines to carry the meaning of the work.

Hayes and Smith describe the works as having a “language of visual cues,” in the exhibition statement.

“Things are expressive, because of the way they look, for instance, a jagged line is expressing something different than a curvy line,” Smith said.

The artists use this language of visual cues to communicate with the viewer, and each other. The artists have been displaying work together for between four and five years, according to Smith.

“In terms of the way [Hayes] handles the material, the way she composes, puts thing together; it’s after my own heart,” Smith said. “We have the same concern for observation and then turning that observation into something else.”

Wood described the artists as “life partners who paint together.”

“We wanted to show them together so you can see the similarities and have them interact and have a conversation,” Wood said.

Wood described how the two artists communicate by using the language of visual cues, a language that transcends politics and history.

“It’s really art in its purest sense, it’s not necessarily trying to also be historical or narrative, the message is more visceral, it’s more emotional,” Wood said. “I want [viewers] to walk away with a sense of what it means to make a mark or a form on a canvas.”

One of Hayes’ sources of inspiration is the American River Parkway.

“The drawings of the Parkway are my humble attempt to express my experience of its extraordinary beauty and profound influence on my life,” according to her artist statement.

Her treatment of the observations she made on the parkway employed a subtler approach compared to the highly abstracted work of Smith, though she was by no means adverse to expressive abstraction in her work.

She used a more naturalistic color palette in her oil pastel drawings, which depict landscapes from the American River Parkway on top of old maps.

The mixed media drawings attracted the attention of freelance photography students Tara Duvall and Danielle Emery, who were admiring the pieces that covered the gallery walls.

“It’s a really cool idea to show images over the maps. The oak leaf over the map is really standing out to me,” Emery said.

Hayes’ drawings of the parkway attracted the attention of Duvall as well.

“I like the American River Parkway with the roots,” Duvall said. “I find the root structure really cool.”