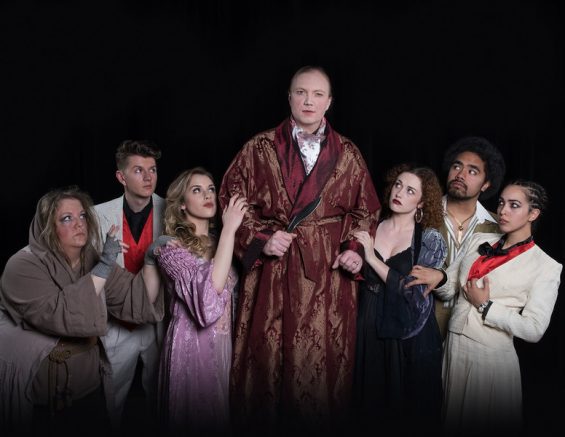 What do musical numbers, a post-apocalyptic world and William Shakespeare have in common? A melding of these elements will soon be on display in American River College’s stage production of “Julius Caesar”.

The play involves a new take on the classic tale of war, betrayal and self-realization, and was directed by Theatre Arts professor Samuel Williams,.

“We are doing [the play] post-apocalyptic and it is a musical with a lot of dancing, so it is pretty crazy,” Williams said.

Aided by collaborating with his production crew, Williams stumbled on his ominous twist of this story. He told members of his artistic technical team that he didn’t wish for the production or costumes to reflect a specific time period. It was Williams’ hope to exemplify the idea of war; in his opinion war has no specific era — it transcends time.

“War is timeless and I wanted that to reflect in this play,” he said.

According to Williams, the decision to incorporate both dance and musical numbers into the Shakespearean world was an easy one.

“Shakespeare lends itself to music and he almost forces you to do it,” Williams said. “[Music] also helps tell the story and clarifies some things to the audience.”

The play is not reliant on Williams alone — it also includes a cast of 26 members.

Williams says he endeavors to work with each member of the cast individually to help develop their character so they can perform at their best.

Kimberlee Wilson is one such cast member; she plays multiple roles in Williams’ upcoming production.

“I love working with Sam because he’s fun, he pushes you and he’s super-talented,” Wilson said. “I learn something every time I’m with him and he’s a very good teacher.”

Wilson said she enjoys Shakespeare’s work; “Julius Caesar” in particular. She feels it is relevant to today’s political and economic climate.

Williams feels similarly about his production.

“It is exciting and you will learn a lot about yourself. And the world we created gives you a different perspective on looking at our own world,” Williams said.

The play opens April 20, and will run through April 29.

Sac Ghostbusters remember their past haunt of ARC

Organ recipient educates others on the importance of donating