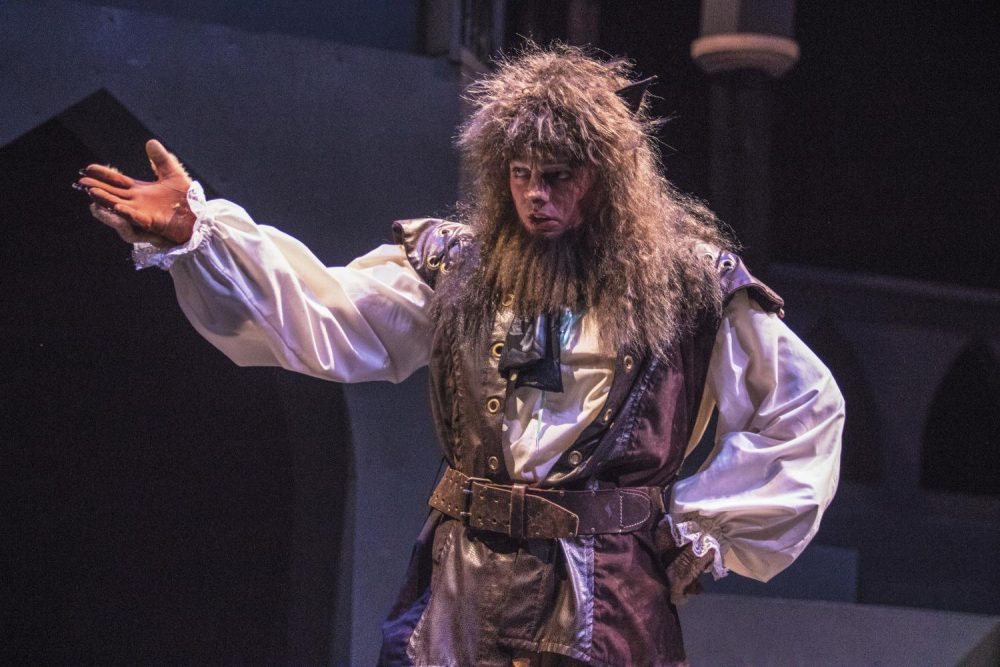 Actor Branden Price runs through a scene during a rehearsal of "Beauty and the Beast" on Oct. 4 at American River College. (Photo by Ashley Hayes-Stone)

A great monster bounds across the stage, each step is labored. Each breath heaving.

His clothes hang upon his frame, hair hanging long down his shoulders obscuring his face.

His very essences cries of sadness, of heartbreak, of pain untold. He stops center stage and begins to sing. The theater vibrates with each note. As the last syllable hangs in the air, the crowd before him is silent for a long moment.

Applause erupts from the seats, as the curtain closes on The Beast.

It may be hard for some to believe that this is the same person, who as a little boy would crawl on the floor, plastic crate meticulously placed upon his back, pretending to be a hermit crab.

Branden Price is starring in American RIver College’s production of “Beauty and the Beast,” as The Beast. This will be Price’s first starring role at ARC, and only his second performance on campus.

However Price is not new to the stage. He has been performing with Stand Out Talent in Roseville, a community theater, and Stage Right Productions, a youth acting troupe in Fair Oaks, for much longer.

Price grew up a musical child, learning to both sing and play the flute.

“My mom is a music teacher, she was also always the choir director at my church,” Price said.

His mother also encouraged him to sing in the choir whenever the opportunity presented itself.

Kirsten Price said she encouraged all four of her children to learn to play musical instruments, however Branden developed his passion for singing all on his own.

“I’d practice my flute a lot, and he’d be singing what I was playing, in the exact same key, I thought it was just crazy, and this was days later in the exact same pitches,” Kristen Price said. “The singing just kind of happened, I never pushed him to sing like that.”
However, it was around adolescence that Price discovered that he enjoyed singing for fun as well.

“I’ve been singing most of my life, but it wasn’t until college that I really applied myself,” Price said.

Theater has always held a magic for Price, ever since he saw his first play, a performance of “Les Miserables” he immediately fell in rapture.

“The guy who played Valjean was so good, and the whole show was so spectacular,” Price said. “It was at that moment that I really felt that this was something I wanted.”

It wasn’t until years later however, that he would actually do anything about it.

In high school, Price tagged along with his brothers to see a friend’s performance with an after school program that he identified as a way to pursue theater.

“I went to go see them perform and I thought it looked pretty fun, so I auditioned,” Price said.

It was through this after school program that Price was given the opportunity to go on tour through both Peru one summer and Ecuador the next.

“It was a great experience, it got him on stage, and he loved it, and then after that he was like ‘I want to do something like that’,” Kristen Price said.

It was when Price joined Stand Out Talent and Stage Right Productions that he began his career in the theater industry.

It was with the latter that he was able to perform in a production of “Les Miserables,” not only his favorite musical, but the same play he credits with initiating his passion for theatre. It was there he was nominated for an Elly Award for his performance of Inspector Javert.

An Elly, named for the late Eleanor McClatchy, is an annual award given for outstanding achievements of community theaters and artists in the Sacramento area.

Price said he has particularly enjoyed working on ARC’s production of “Beauty and the Beast.”

“Everyone is just giving their ‘A’ game, everyone is just so talented and hardworking,” Price said, “They are working day and night to put on this great show.”

With a show such as “Beauty and the Beast” there is a lot of chemistry expected between the two lead actors.

“Me and Elizabeth [who was cast as Belle] have talked about our characters in depth, we’ve worked the [‘Beauty and the Beast’] dance detail by detail, we work really well together and both strive to give the best performance we can,” Price said.

The Beast can be a difficult character to portray, and so Price had to decide how he was going to bring life to such a well known and beloved character.

“I’m pretty quiet and reserved off stage, but on stage I can be big and loud,” Price said. Having such a stage presence can be advantageous when playing a personality as large as the Beast.

“What I do to get into character is think of times in my life where I’ve felt similar to the beast, feelings of helplessness, despair,” Price said.

But it’s not just about the feeling Price must also walk the walk. “My movements for the Beast’s walk is slow and heavy because of his heavy heart,” Price said.

Surprisingly, Price’s least favorite part of the entire show may be the costume he must endure putting on during every performance.

“If I killed myself I think hell would be cooler,” Price said describing the costume,”it is so hot, I wear like 50 layers.”

He must wear an undershirt, a styrofoam chest piece, the actual costume; his face is covered in prosthetics and a “massive” wig.

“People told me it would be hot, I just didn’t expect it,” Price said.

Overall, however, Price has enjoyed being apart of the production of “Beauty and the Beast.”