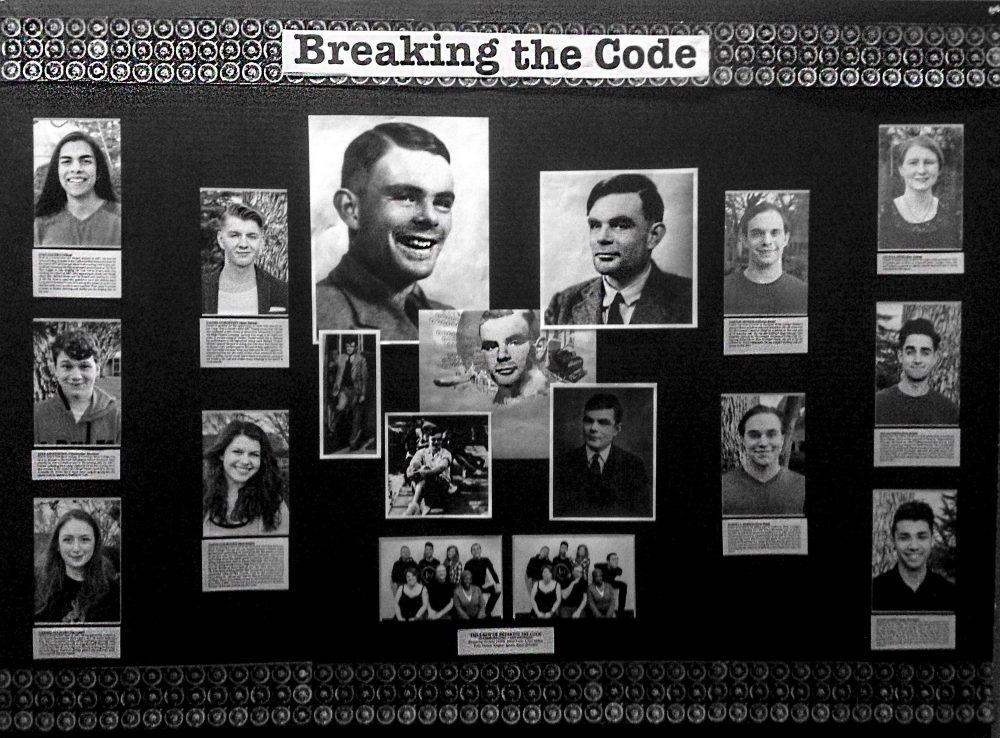 The American River Production of “Breaking the Code” presented their show about Alan Turing who helped break the German code during WWII. The poster shows the actors in the show. (Photo by Lidiya Grib)

The play production “Breaking The Code” recently ran for two weeks at American River College, presenting a spectacularly performed show about a man that most people can appreciate and respect — Alan Turing.

This play is based on the true story of Turing, who is well known in history for his participation in helping break the complex German code during World War II, and who experienced more than many people do in a lifetime.

This play is different than most, involving a story of pure genius, passion, betrayal, loneliness, isolation, and ultimately death.

Pursuing a life of passion and secrecy, one of these secrets remained hidden from the public during the war; he was put on trial for the other: his life of homosexuality.

During that time, being gay was illegal in Britain and pursuing homosexual relationships brought terrible consequences; what the play brings to the table is the effect of what being exposed for that resulted in.

Throughout the play, the audience is taken back and forth between three different scenes: Turing’s childhood, his life as he was cracking the code and the scenes where he is being put on trial for his homosexuality.

The seriousness of this as well as his role in working under the secret government to break the code was one of constant awareness during the show.

The funny remarks, unique characters, and absorbing scenes did little to lift the weight of the impactful events Turing experienced.

Through and through, we get a hint of who Turing was, what his life was like and who the people in his life were. His relationships, passions and experiences are portrayed with deep intimacy.

“I want the audience to feel what it was like to be an undeniable part of the social circumstances from which Turing could not escape,” wrote Jason Long in the director’s note in the show’s pamphlet. “Hopefully the impact of that sensation will lead to reflection, conversation, and perhaps action.”

This play was meant to differ from the film “The Imitation Game,” which is also based on the life of Turing, but it gave the audience more than the film could ever achieve.

An audience member at the show John Lucero, whose son Evan Lucero played the Greek lover in the play, responded to the show by saying that he appreciated that the play brought an awareness of what was important to Turing in life and science.

“You can feel the changes, not only see it,” Lucero added in regards to the transitions throughout the play.

The climax of the play happened around the time that Turing is sitting in the police station and it slips out that he is homosexual; only then it dawns on him just what the repercussions this will bring.

“It was well scripted and a good play; the actors were great”, said ARC student Laodicea Broadway after the show had ended.

Overall, the play presented a tremendous biographical story that turned out to be more than expected. The audience gets to learn about his relationship with his mother, a woman he meets, and the sexual relationships he is involved in.

“During a time when it is increasingly important to respect individual rights and freedoms, Alan Turing’s story has the power to turn from being one that reflects tragedy to one that ignites liberty,” Long wrote in his note.