Worthy Goat is worth the listen 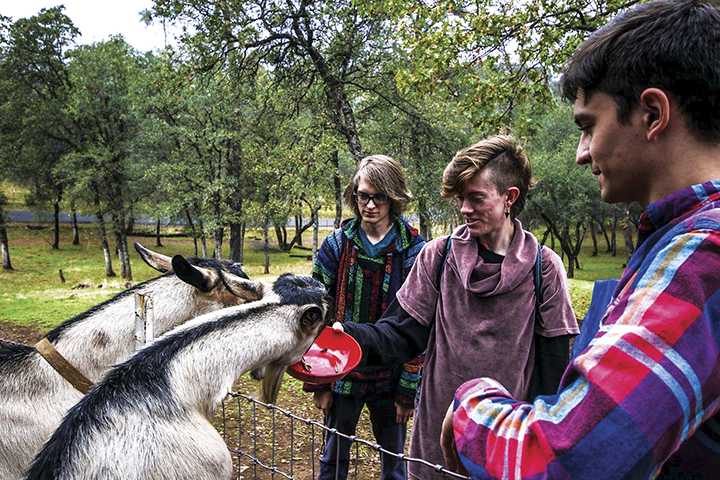 There is lo-fi and then there is Folsom-fi; a sound so unique, there is only one band in the world that can carry the label: Worthy Goat.

With Bryce Mondul on vocals and guitar, Justin Carter on lead guitar (and any other instrument he feels like playing on that particular day) and Georgio Klironomos, the  group’s full-time dancer, part-time dried bean player, Worthy Goat has a combined stage presence that few other acts can compete with.

Music journalist Robert Berry described the trio’s unique sound in a recent Submerge Magazine: “Worthy Goat sounds like nothing I’ve ever heard before. It’s like aliens intercepted space-audio from Grateful Dead and Daniel Johnston albums that got mixed with some episodes of Spongebob Squarepants and were so enamored by what they heard, they decided to form a tribute band.”

When the band isn’t intercepting alien radio signals, its members keep themselves busy by playing a near daily stream of shows from Placerville to Sacramento.

The band has become regular staples at local open mics and venues like: Old Ironsides, Oak Park Brewing Company, and what they call their “home” venue according to Mondul: Cozmic Cafe in Placerville.

Mondul and company have established themselves in the greater Sacramento music scene in a way that few other bands have. Not only do their fans know the songs up in the alien hills of Placerville, but they are just as likely to sing along in the storied walls of Old Ironsides.

Juan Mondul, band manager and father of Bryce Mondul attributes this success to their work ethic.

“They have over 50 songs ready to go. And I’m not talking about song ideas, I’m saying 50 songs that are already written and rehearsed,” Juan Mondul said.

Carter said the band’s catalogue of music might even be in the high 60s.

“We’re pretty sure we don’t want to give up on any of them. We don’t always play all of them live because they aren’t right for all audiences. Some of them are honestly creepy, some of them are sad, some of them are happy as hell,” Carter said. “There are tons of reasons we don’t play every song in our repertoire but most of them get the light of day at least a few times.”

According to Carter, most of the band’s music comes directly from Bryce Mondul himself.

“Bryce writes almost a complete song by himself to be honest. It’s very rare sometimes that I help him in that process. There’s a couple of songs that we’ve done like that… He [Bryce] has a very unique sense of chords.”

Bryce Mondul said of his songwriting process that the ability to disguise a song’s true meaning was one of the most important facets of his music.

“I know I put a lot of colors into Worthy Goat’s stuff. I know I make all of the chords pretty. I make my voice high but that’s to mask the subject matter of it,” Mondul said. “If I want people to get anything from the songs, or especially the album, it’s just about getting over depression and pulling yourself through.”

Whatever the reason may be for the band’s sudden success, it seems to be working strongly in the band’s favor as Worthy Goat recently had the chance to have its music appear on local radio station 98 Rock’s “Local Licks” show.

Mondul, Carter and Klironomos sent out a group message on Facebook to nearly 200 people before the song hit the airwaves in order to have people tune into 98 Rock and vote for their song “Mobile Bill” to receive more airplay.

Klironomos, who attends American River College as a computer science major, said: “It felt righteous to be putting more art into the airwaves.” The self-described “dancer of Worthy Goat” said with a giant smile spread across his face.

Mondul stressed the importance of not celebrating too quickly.

“End goal? Do you listen to a song so you can get to the end of it? No, you listen to be in the middle of it. I play music to be caught in the moments of magic that it creates. I have many small goals, like practice, shows, art and building a fanbase but I have no end goal,” Mondul said. “If that’s not a good enough answer, then my end goal is to play until I die.”

Their debut album “Jangle Beats in the Valley of Repeats” was released last November. Carter and Mondul both quit their jobs to record the album and Klironomos took two weeks off of work.

Klironomos described the recording of the album as “probably the funnest two weeks I’ve had in awhile. It was so awesome. Being cooped up in that small studio just pounding out an album with my best two friends, how could I ask for more? It was so cool.”

Guitarist Carter said that the tracks “A Day in the Heart” and the self-titled “Worthy Goat” stood out to him.

“They just remind me of everything we have been through together. We’ve watched each other go through a lot of heartbreak and such. Growing up, you know? Coming of age. That’s what those songs remind me of.”

The band will be one of the performers at the “Family Vacation” music festival in Placerville on May 21.

“We have never played a festival before. This could likely be the largest audience we’ve ever played to and for the first time we will be playing as a full band with drums, bass, and two guitars,” Carter said.

Tickets for “Family Vacation” go on sale this Friday. Tickets can be bought directly from the band themselves or from the promoter of the festival: Bit Crusher.

Worthy Goat’s music can be found on Spotify and all other major online music outlets.