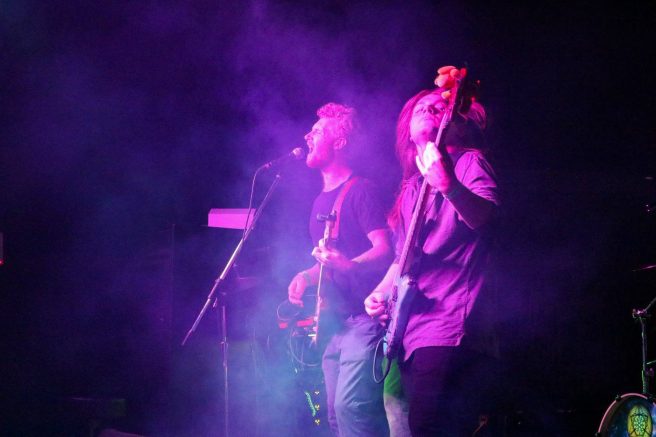 Technical difficulties, a year hiatus from playing live and preparing to send off their bassist are just a few of the difficulties local alternative band Lucid faced the day before their show at the Boardwalk in Orangevale on Friday.

American River College students Matt Lomas and Tristan McNay have been friends since McNay joined the band in Dec. 2013.

The band comprises of Lomas on drums,Tim Towne and Jordan Simpson on keyboard, Stu Sower as lead vocalist and guitarist and McNay, who performed for the last time as Lucid’s bassist.

A few hours before they were to perform, band members Towne and Simpson stressed the importance of working together to problem solve.

In this case their supportive nature and teamwork is what made it possible for them to have their equipment ready to go for the night.

“So actually two days ago my laptop just started working to where we knew we were gonna play this show,” Simpson said.”

Towne said, “I had to get everything ready in four hours.”

Fortunately, Towne possesses a lot of knowledge when it comes to programming, “If it wasn’t for Tim we’d be lost,” Simpson said.

Beyond their technical problems and McNay’s last performance, the musicians discussed how they felt about playing.

“It’s definitely going to affect us locally,” Towne said. “I’m not really worried about anything I  just want everything to sound good.”

Lucid was fourth to play that night out of six bands. In order from first to last the list went as follows: Surviving the Era, Altessa, A Foreign Affair, Lucid, The -Body Rampant, and Demon in Me.

The venue was relatively small but with more than enough room to move around and dance.

“Boardwalk’s always been a good spot for getting good local bands,” Towne said.

Minutes before Lucid was to play, fans and first time listeners gathered at the railing in front of the stage.

Deanna Ruiz, a frequenter of the Boardwalk said, “I’m excited to hear them. Anybody really who tours with Demon In Me has usually been up to par with my standard of music.”

Danny Hopkins and John Valencia, friends and fans of Lucid, were among the crowd of people gathered and waiting in front of the stage.

“They decided to take a different route in their music and I personally think it’s one of the greatest things to hit Sacramento,” Hopkins said. “They are some of the most talented people I have ever met.”

Hopkins wasn’t the only one who noticed and liked the change in their music.

“The last music they released sounds completely different from what they have now,” Valencia said. “I love it. It sounds amazing.”

Not only was their support from their friends but also family. Gina Holmes, McNay’s mom, was front and center.

Holmes said, “(Tristan’s) self taught. It’s crazy I’ve always been a fan of music but I’ve never had any musical talent.” and that she “one hundred percent supports his love of music.”

Each band played for roughly twenty to twenty-five minutes. Lucid ended up playing five songs in total, three of them being off of their EP, “Now I can see again”, “All for you” and “Starlight”.

The other songs were not off the EP but were new and they were, “Is this real” and “Do you know”.

The aftermath can best be explained by the band members themselves and the fans who came out to support.

Hopkins said, “The show was amazing. Nobody expected Lucid to sound the way they did. So many people were dancing.”

“I truly feel like they got the best reaction of the night.” Valencia said, “Lucid was amazing as expected.”

As for the final hurdle, playing one last time with McNay, there were only good things to be said.

”I was oblivious to the fact that it was the last show with him until he gave his speech, then it hit me hard,” Simpson said. “Playing with those guys, you kinda lose all train of thought and just vibe. It was bittersweet for sure but I was just happy to be on stage with them again.”

“I will miss being in a band with them, but the music isn’t gonna stop here,” McNay said of his last show with Lucid. “We are all still best friends and we will definitely still be writing tunes together.”

Lucid is “the perfect blend of literally everything,” Hopkins said.

Be the first to comment on "Lucid makes dreams come true"