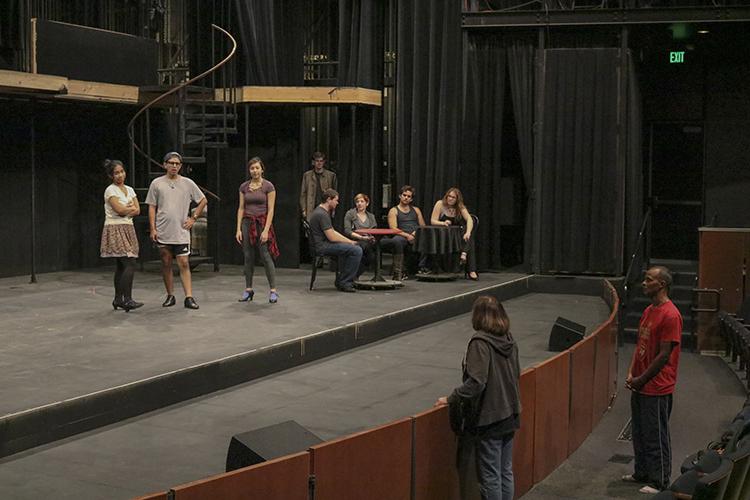 Director Nancy Silva giving instructions to some of the extras in “Cabaret" at a rehearsal on Sept. 21, 2016. (Photo by Lidiya Grib)

The American River College theater department will be directing “Cabaret” for the first time in nearly 30 years, starting Oct. 7.

“It is a piece that is really offensive,” said play director Nancy Silva, “but you get what it’s saying and it’s powerful.”

“Cabaret” is set in Berlin, Germany in the 1930s during the rise of the Nazi party and recognizes the powerful influence of demagoguery in the time Hitler ruled Germany.

“I enjoy doing musicals that are darker, and Cabaret is that type of musical with a very different approach,” said Silva. “It’s like a ‘Road Warrior’ meets science fiction”.

“Hitler was one of the biggest demagogues,” said Silva. “He lied and told people what they wanted to hear emotionally.”

According to Silva, she chose this play largely because of its strong resemblance to the world we live in today.

“I feel really strongly that there is a relationship between the demagoguery in time of Hitler and the times that we are living in today,” said Silva. “It’s very possible that there is a very powerful demagogue in this country today that we all need to be aware of.”

Silva describes demagoguery as people that “find the cultural problems of the time and appeal to the emotions of the mob and blame it on other groups of a different race or religion.”

“I’m hoping to have an intellectual response to the play,” said Silva. “I want people to sit back and think, ‘wow this is a terrible thing that happened to these people. This is feeling like what I’m seeing happen to my country today!’”

She goes on to say: “the play doesn’t force feed people with it but it asks them to react on an intellectual level and not on an emotional level, because that’s what demagogues feed off of.”

The original version of “Cabaret” presents what happened during the Holocaust but “doesn’t do it in an emotional way at all,” said play director Silva.

Silva went on to say, “this play makes a statement not only about the 6 million Jews killed, but also the other few millions of people who the Nazi government felt were undesirable.”

That is “communists, gypsies, homosexuals and people with mental and physical disabilities that were also rounded up and killed.”

“It will not be controversial,” said Silva. “It’s like one of those pictures on a wall with those dots all over and if you relax your eyes you can see a picture in it but some people can’t.”

While the play deals with the delicate nature of the Holocaust and pre-World War II Germany, the theme of the play is directed towards a more adult audience.

“Its definitely rated R and not for children,” said Silva.

The ticket prices are $12 for students, seniors and staff, and $15 for general visitors.

More information regarding the play can be found on the ARC website, under Calendar/Events.