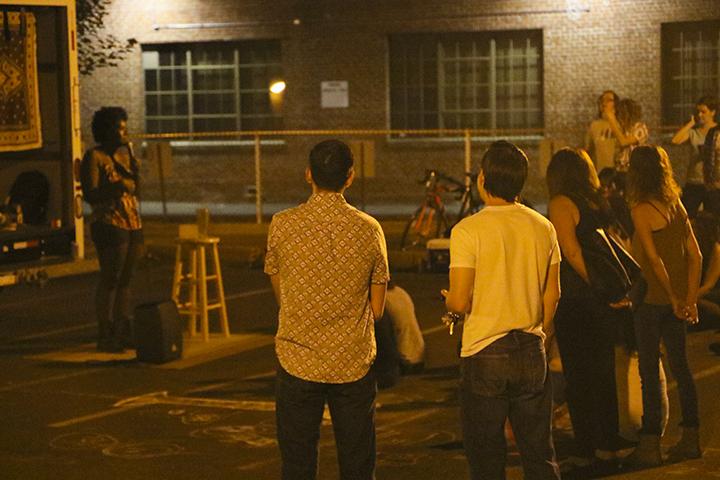 Comedian Becky Lynn performs at the “Moving Van Show” on Sept. 17 in a parking lot in Sacramento (Photos by Luis Gael Jimenez)

The “Moving Van Show” is a monthly comedy show that takes place out of the back of a U-Haul truck in various undisclosed locations around midtown.

The venue of each show is only announced two hours before showtime, via Twitter.

The show is organized by three comedians who each take on different responsibilities.

American River College English professor, Joe-Joe Louis, is the creator of the show and one of its featured comedians.

Comedian Melissa McGillicuddy is responsible for renting the truck and setting up the speaker and microphones at each location.

“I had the idea and she (McGillicuddy) helped set up the logistics of everything,” said Louis.

Shahera Hyatt, who served as the host and promoter of the last show, urged people to “come find us before the cops do.”

The police did in fact show up at the last show on Sept. 17.

Just as the show was winding down, two police officers approached the “Moving Van Show” staff and began asking them about the purpose of their show and whether or not they had the proper documentation to put on a public show.

Hyatt describes the show as a “reclaiming of public space.”

Since the show is done without the proper paperwork or permits, there is always a constant fear of being shut down by the police at every event.

Hyatt is not fazed, however.

“Building tension builds laughter,” said Hyatt, and that is exactly what happened on Sept. 17 in a near-empty parking lot on the corner of I and 20th Streets in midtown.

A crowd of about two dozen found themselves sitting on curbs, and even the asphalt to watch stand up comedy on a Saturday night.

Most of those in attendance showed up on bicycles or on foot, further adding to the impromptu nature of the night.

Faust was one of the first audience members to show up and stuck around for the entirety of the night, adding that he felt the show was his “kind of comedy” and that he would recommend it to anyone who loves a good laugh.

The next show is scheduled for Oct. 22. The venue will be announced the same day.