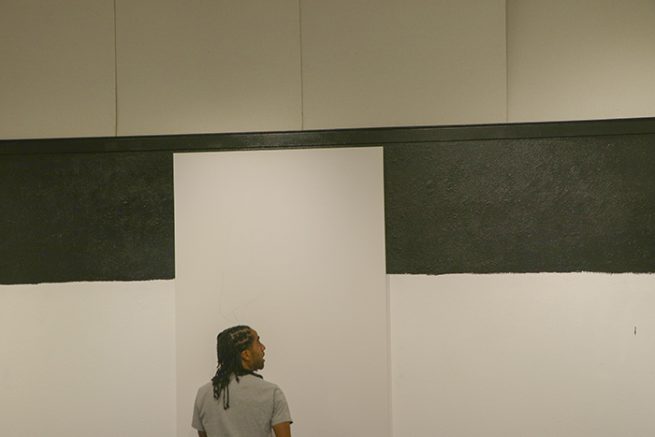 Unity Lewis planning out his artwork in the Kaneko Gallery

Over the course of the next week, artist Unity Lewis will be hosting an exhibition and live art show at American River College’s James Kaneko Gallery, which will take viewers through the history of African-American art and its artists.

Lewis has set up shop in the Kaneko Gallery and has begun painting murals and hanging canvases on its walls. Lewis’s show runs from Sept. 19 to Oct. 13.

He will spend the next eight days transforming the walls of the Kaneko into a visual timeline of African-American art.

His muralistic style is interlaced with hip hop influence, homages to fellow black artists and the story of his family

According to Lewis, his grandmother was the first black woman in the country to earn a doctorate in fine arts and art history.

His mother, Sita Neeley, is an accomplished artist as well.

He hopes to tell her story, and the story of African-American art, through his own art.

Lewis’ exhibition at the Kaneko will also feature some of the work of legendary funk musician George Clinton from Parliament-Funkadelic.

Lewis will be painting live in the gallery and urges students to attend.

David Jackson, a childhood friend of Lewis and his assistant, claimed that watching Lewis paint is “a show in itself.”

Neeley, who encouraged her son to display his art at ARC, said that “we’re trying to get him established in Sacramento.”

She also urges students to come observe Lewis and his painting process.

She added that this would be a place where students can talk to someone who has already discovered their passion.