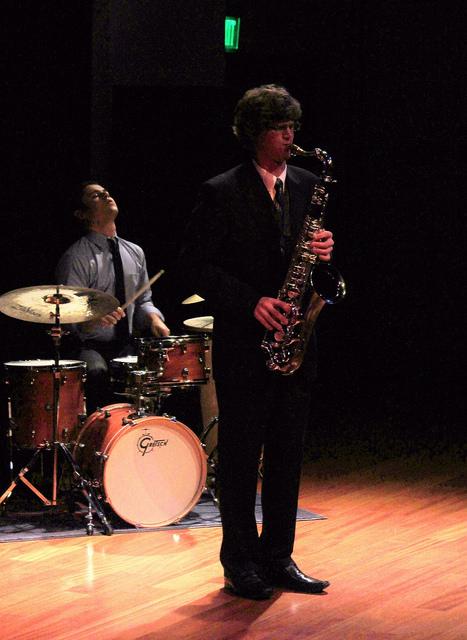 Seven different musical acts were showcased to display the skills students had acquired throughout the semester.

“I’ve been singing since the age of nine and I started singing at ARC about two years ago,” said Jones.

Jones’s applied music instructor, professor Catherine Fagiolo, was in attendance, as well as some viewers in the audience that had come to see him.

Maddy Wills, a friend of Jones, came to ARC to watch and support him. “He is a great friend and

I really enjoy hearing him sing. We have been friends for a long time,” Wills said.

Anthony Johnson is another applied music student that performed in the recital and played the drums along with Darius Upshaw on guitar, Dr. Joe Gilman on piano and Kyle Tyson on bass.

Together they played “Simon Says.” Their applied music professor is Rick Lotter.

Kathryn Rosander, an English major in her third year at ARC, was in the audience to see what the performers have.

“I sing in the Chamber choir here at ARC and enjoying being in the audience watching them sing,” Rosander said

Christian Rico who plays a guitar in the applied music program joined the audience for this performance. “I’m here to support my fellow classmates,” Rico said.

The applied music program offered at ARC is for inspired musicians to expand on their potential while earning a degree.

American River College offers an Applied Degree program for students. For more details about the program, go to ARC.LOSRIOS/EDU/MUSIC.

Applied music recital will be held in the Music Recital Hall Room 547, at 7:00pm Thursday May 5.