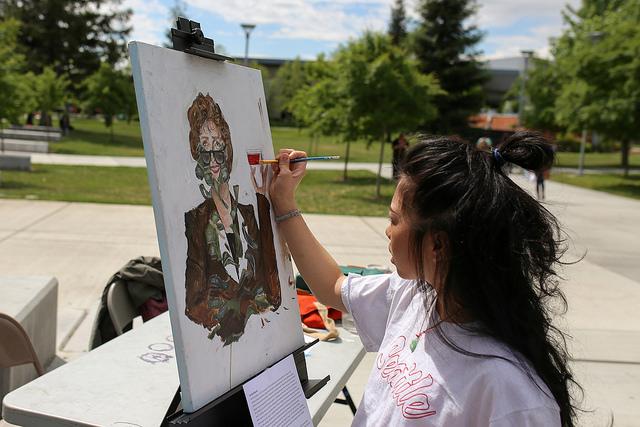 Artivism, a combination of art and activism to spread awareness of social injustices primarily toward people of color, came to American River College on Wednesday.

ARC student and painter Kashia Lynhiavue was live painting at the event.

The artwork that drew in the most viewers was her piece titled “Linda Katehi” that captured the former UC Davis chancellor wearing sunglasses to “hide her view of the protestors that were being pepper sprayed on campus.”

“I decided to paint (Katehi) because it’s current and I want ARC students to know what is happening to students at other schools, who are protesting the unaffordable tuition rates,” said Lynhiavue.

Brooklyn DreamWolf  is a hip hop duo made of Jendog Lonewolf and the award-winning performing artist and poet, YaliniDream.

The hip hop duo performed at artivism and used the accessibility of hip hop to “spread a meaningful message to people while they are young,” said Lonewolf. 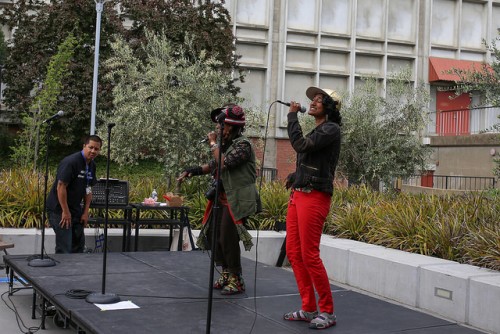 Several different organizations were present at Artivism, including the Latino Coalition for a Healthy California, a company that spreads education on diabetes and how much sugar people intake daily.

Adriana Mora, a representative for the organization, has been a part of the company for six months and “travels throughout all of California to explain how the consumption of sugar can lead to diabetes.”

Mora says that the company is primarily focused on people of color.

“They’re targeting us and we want people to know their products, such as soda companies, are hurting us,” said Mora.

A representative for the Labor Council for Latin American Advancement, Fatima Velasquez was handing out fliers to inform and hopefully persuade them to boycott Driscoll’s Berries because of the unfair way their workers in Mexico are treated.

The Driscoll’s workers went on strike on March 17 demanding better wages and to stop the exploitation of women.”

Velasquez referred to their treatment as a “modern slavery.”

Artivism’s impact was “truly inspirational especially to people of color and anyone willing to learn. I hope (ARC) does this every semester,” said Mora.

Son of a famous parent establishes himself as musician