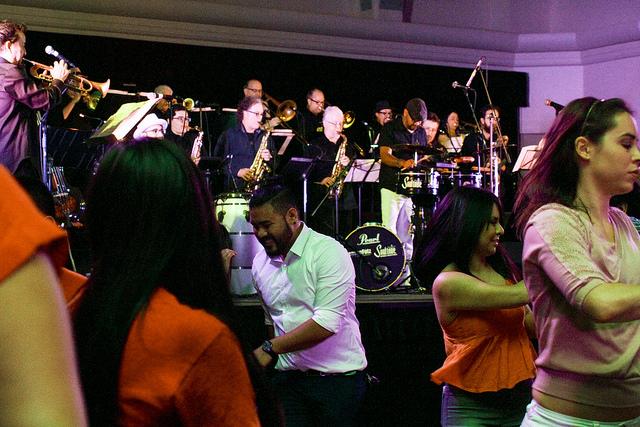 At Sacramento State University Union Ballroom on April 07, 2016 a concert was celebrated by the Grammy- Award winner Pacific Mambo Orchestra in which the audience danced to the rhytm of salsa, mambo, latin jazz and bachata. The event was organized by Salsa Loca Club and UNITE programs at CSUS (Photo by Itzin Alpizar)

“Y un, dos, tres, turn round, tres cuatro, salsa step…” are the words the audience heard while they were learning the new steps taught by the dance instructor from the Salsa Loca club at Sacramento State University’s (CSUS) Union Ballroom on April 7.

The Sacramento community met to attend the concert of the Grammy Award- Winning Pacific Mambo Orchestra (PMO), organized by Salsa Loca club and the UNITE program at CSUS.

“I was a beginner, I’m still now,” said Cairo. “My favorite is bachata… I’m a DJ too, so I really like all the different types (of Latin music).”

The lights in the ballroom started turning red, green and blue to the rhythm of the music while participants were learning the new Latin steps very quickly.

Around 7 p.m., Erika Galvan, Salsa Loca club and UNITE president, presented PMO to an excited audience waiting to use their new movements.

The audience started clapping and dancing to the rhythm of salsa, mambo, Latin jazz and cha cha cha presented from the orchestra in a ballroom full of high heels, cocktail dresses and suits.

The PMO was founded in Oakland, California in 2010 and recorded their first album in 2012. They are currently the only entirely active Latin big band on the west coast.

Popular Latin songs such as “Oye como va” by Celia Cruz, “Overjoyed” by Stevie Wonder in salsa version and “The Pink Panther” mambo version, along with the orchestra’s current repertoire and Latin jazz, enriched the night.

Maria Alfaro, member of the UNITE program at CSUS, said that this is the fourth time that they have organized this kind of event between UNITE and the Salsa Loca club, but this is her first time participating.

“It is a new experience, I have never organized an event before,” Alfaro said. “I wish I was dancing, but tonight this is my job.”

Galvan presented other performers of the night during a break from the PMO.

Sac State’s Ritmo Salvaje Dance Project was the first group to perform, with two teams with salsa and bachata choreographies.

Yemaya Salsa Dance Company, a “non-profit public benefit corporation” according to their Facebook page, and Yemaya Esú (bachata) presented their choreographies in front of the audience with songs mixing Spanish and English, acrobatic movements and the famous Michael Jackson “Thriller” choreography in salsa version.

He said that he “found a new passion and won’t stop.”

To close the halftime, Galvan presented Andrew Cervantes and his partner John Narvaez, who are the three-time World Latin Dance Cup winners and America’s Got Talent season nine semifinalists.

Cervantes is currently a salsa instructor and dance competitor from Sacramento.

After the performances, the Pacific Mambo Orchestra was called again to the stage for more than an hour of live music and dancing that lasted until after 10 p.m.

Many people were invited by Facebook to attend to the event. One of them was Rosie Arroyo, who said that she enjoyed the night.

“It is such a great night. I really like it …” Arroyo said. “I’m too old to study here (at CSUS), but I dance salsa, Bachata, cumbia, everything, so I came here to “disfrutar” (have fun).”

Cairo is also a former business student at CSUS. He participated with Salsa Loca club in organizing the 2015 event.

“It was a great night… we have more or maybe the same amount of people we had last year,” said Cairo.

Cairo said he wanted to invite the Sacramento community to Salsa Loca social evenings every Wednesday at 7:30 p.m. at the CSUS Union Ballroom.