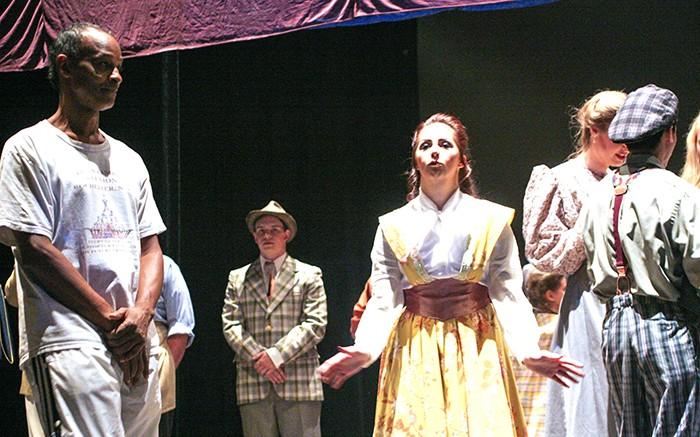 Sam Williams, left, waits with his cast for the technical rehearsal for 'The Music Man' to begin. Williams directs the play, which closes on Oct. 25. (Photo by Joseph Daniels)

An American River College theater department professor has brought his love for theater to many universities and stages around the country.

It has been Sam Williams’ goal to help student performers at ARC reach the next level.

“The Music Man” is a musical about a con man who comes to a small Iowa town to pose as a band organizer, and plans on skipping town without giving anyone any music lessons.

“The reason I chose (“The Music Man”) is because it has great roles for both males and females and has a good variety of singing, dancing and acting,” Williams said.

The actors of the production praised Williams of the amount of freedom he allowed them to have.

“He helps a lot with character development to the point where he wants you to know what that person would have for breakfast, lunch and dinner,” said Kimberly Colisch, who is working with Williams for the first time. “He wants more than just remembering your lines.”

Another student who has worked with Williams and has seen a lot of improvement in his acting is improv performer turned actor Spencer Murrish.

“I have a strong improv background, but he taught me how to attack my lines and scripts,” said Murrish. “He attacks it section by section and doesn’t move on until it’s perfect. … He strengthens the foundation of acting, but attacks it where you end up learning something.”

Williams has been involved in theater from a very young age, performing and later directing at his local church in West Virginia for a “Devil’s Funeral” performance that raised money for charity in his local community.

Williams was born and raised in West Virginia and directed a play called “Appalache at the Cross” at Center Michigan University, which beckoned back to the area of his upbringing by including music from the Appalachian area in this religiously based performance.

Williams is not the only person in his family to perform as his daughter Sarah Williams, a former Sacramento Kings dancer and announcer with the Sacramento Monarchs, is now helping with choreography for “The Music Man.”

Williams said that he has some criteria for plays he chooses to direct.

“I really look for things to inspire me and I want to stay broad in my choice to keep challenging myself,” he said.

College hour discusses how to be prepared for wildfires