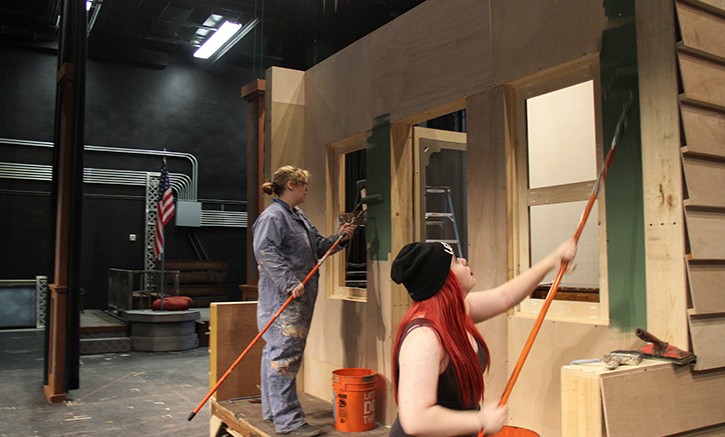 While many students at American River College started work at the beginning of the semester, the members of the theater department had been already working for months.

Former stagework student and theater tech work major Kathy Smith said that the sets used in a play are beneficial because they relate to the characters.

“They can tell you where the characters are, (and) where they’re going,” said Smith. “It helps you become a part of their world.”

The course is a six hour a week course, and students must complete 36 hours of lecture and 72 hours of lab work.

Students are enrolled in a stagecraft class, which also acts as a lab that is dedicated to the construction and theater props that are used by the theater department’s productions.

Theater department employee and scenic painter for the sets of “Music Man” Amelia Holt said she likes that the jobs are given to students.

“It’s an artisan, it’s a trade,” said Holt. “It gives us jobs as opposed to exporting it out.”

For modern plays, many scenes are printed out digitally, which Holt said makes the whole scene end up looking “flat.”

Theater arts and technical major Melanie McClurg said that building sets as opposed to printing the scenes or having someone else build it is “ridiculously” more rewarding.

“There’s something about having this random box of stuff,” said McClurg. “(It) has more of a human feel, there’s something to be said about making it yourself…It’s nice to be able to write on job applications ‘can turn boxes into tubas.’

“We have one of the best tech departments, so it’s pretty grand.”

Smith, who said she is learning lighting this semester, called the class “very informing, (and) very involved.”

“I enjoyed it immensely,” said Smith. “You’re able to see every aspect of the show, it’s awesome.”