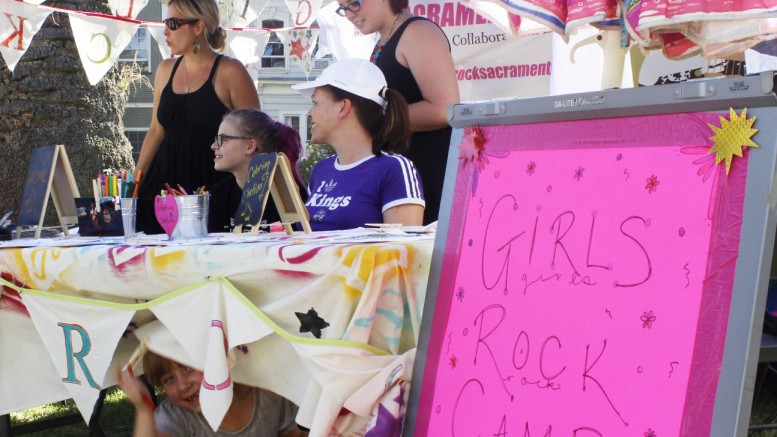 The co-founders of Girls Rock Sacramento (GRSC) Anna Simpson, Emma Simpson and Larisa Bryski share two things in common: they all want to deconstruct gender roles and they all want American River College students to volunteer as mentors for the GRSC camp in June 2016.

GRSC is a non-profit organization whose objective is to empower young girls through music and create an environment that encourages mutual support among women.

This year marks the first that Girls Rock will hold events in Sacramento.

The platform and initial idea evolved from the Rock ‘n’ Roll Camp for Girls in Portland, Oregon.

Emma Simpson attended the camp in Portland when she was eight years old. It was there that she received her first formal guitar and vocal lessons.

Emma’s mom, Anna Simpson, encouraged her to go back each year to be a mentor, but every year there have been difficulties in finding the time and means to return.

“I told her she had to go back to be a mentor, but every year a major thing was happening,” said Anna Simpson. “Then I thought too bad there isn’t one here in Sacramento.”

Bryski and Anna Simpson put their heads together and decided the best next option would be to start a similar local camp.

Bryski was the director of the music program Stairway to Stardom for ten years and a vocal coach at Skip’s music for sixteen years. During that time she was Emma Simpson’s vocal coach.

“When it came time I was ready and I’m a female musician,” said Bryski. “I’m out here in the scene so this seemed like the perfect opportunity.”

The camp involves lessons for any rock band instrument, music workshops, band practices and a performance that will be held at a local venue at the end of the week.

The camp accepts any girls between the ages of eight and 17.

Girls do not need to worry about their musical skills because no experience is required and any music genre can be explored.

There is more to this camp than just taking music lessons. There will also be workshops on self-defense and positive self-image.

“I wish for a day when an organization like this doesn’t have to exist,” said Bryski. “That’s my dream for females in the music world.”

Jojo Mimmick, 13, attended the camp in Portland last year. Her mother Rachel Minnick volunteers and will be helping out this summer.

“It was awesome… crazy to be around everyone the same age,” said Jojo Mimmick.

GRSC has not announced the official calendar dates for this summer, but the camp will be Monday through Friday in June 2016.