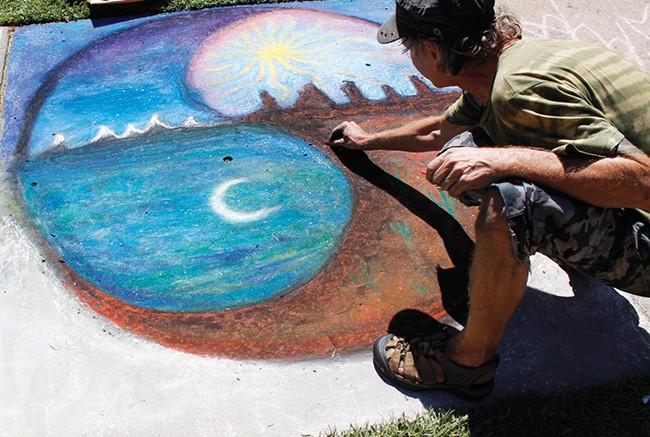 John Steensland, a former American River College student, adds finishing touches to his chalk-drawing for Chalk It Up. He said he liked the way the texture of his art looked on the pavement. (Photo by Cheyenne Drury)

Chalk It Up held its 25th annual art festival on Labor Day weekend that gave artists the opportunity to create chalk-art on the sidewalks of downtown Sacramento.

The organization is a non-profit that donates all of its proceeds toward local youth art programs.

Each square cost $150 to rent, while those who wanted to watch were able to get in for free.

”Zea Marubashi, an art major who attends at Sacramento City College, spent the weekend working on her chalk portrait of a parrot.

Zea Marubashi works on her portrait of a parrot at Chalk It Up. This year was Marubashi’s eleventh year at the event and sixth year next to the same chalk artists. (Photo by Cheyenne Drury)

This was Zea’s eleventh year participating in the event.

“I really like the environment,” said Marubashi. “I’ve been next to the same people for six years.”

SCC alumnus Kelsey Escoler participated in her first ever Chalk It Up this year.

“I signed up and after that I added them on the Facebook group,” said Escoler. “This is my first time working with chalk, I usually work with watercolor and acrylics.”

John Steesland, who graduated from American River College, also had his first Chalk It Up experience.

Steesland’s favorite medium is white charcoal on black paper but he enjoyed working on cement.

Steesland’s piece was not titled but he described it as “capturing the whole idea of yin and yang, it’s just extrapolated yin and yang.”

Folsom Lake City College student Julia Flippo was awarded second place for her close up portrait of a young girl in The People’s Choice, an award that all chalk drawers who rent out a space are candidates for.

There were also live performances by local artists including the band “The Off Years” with one member, Brodie Mills, an ARC alumnus who plays guitar and sings backup vocals.

“I like seeing the people watching us smile,” said Mills. “I’ll find the person who is not fully into it, and I’ll play for them.”

Music Man to be performed at ARC next month

Photo gallery: Chalk It Up

2 Comments on "Chalk It Up draws large crowd"