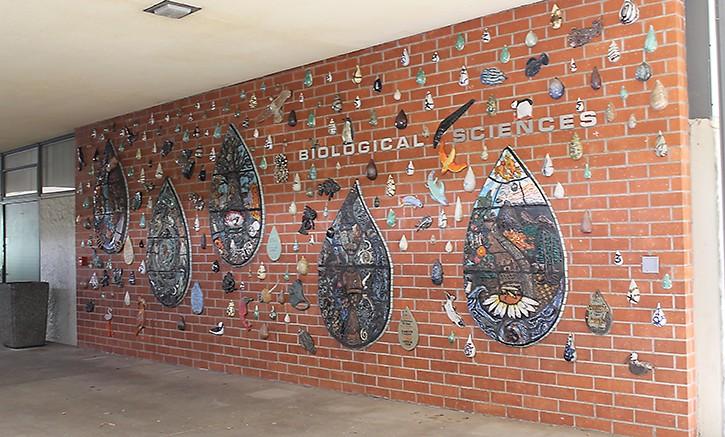 "Rain Dance" will have a mural dedication on April 22, which is Earth Day. These ceramic murals were made from ARC's ceramics department and hanged over spring break.

While students were on spring break, the ceramics department was assembling and hanging the new mural that was sculpted last semester in the American River College science department.

Linda Gelfman teaches Art 398, the class where the mural is made before it is assembled and hung in the spring.

This class is offered every two years and has a beginning ceramics prerequisite.

“We’re talking about the drought and how water is within everything,” said Gelfman.

The mural “Rain Dance” is a sequence of five bas relief style sculptures, which is a sculpture technique in which other design elements are just barely more prominent than the predominantly flat background.

The first bass relief sculpture is conservation, the second is evolution, the third is the cycle of life, the fourth is the water cycle and the fifth is balance in nature.

“(‘Rain Dance’ is) on different aspects of the natural, lived-in environment and we explored a series of topics and we let the topics inform our art,” said Baccei.

Nicholas Batchelor worked on Balance of Nature. He has been a ceramics student for the last two years and spoke about how they were split into groups of four or five to work on the mural.

He also assisted in finishing the glazing this semester because there was a lot left-over after the fall semester.

Gabriel Mendoza, who worked on evolution, spoke about putting in extra hours to fine tune many things on this mural.

“It gives us a sense of pride,” said Mendoza.

Both men agreed on how cool it was to have their artwork permanently up at their college campus.

“It’s a great feeling to be able to look at your art and know its going to be there forever,” said Batchelor.

Although “Rain Dance” is the largest mural in the science department there are also other birds and fish displayed all over leading up to it.

There will be a mural dedication on Wednesday, which is Earth Day.