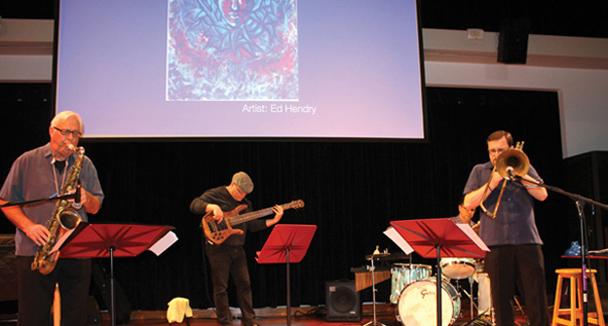 American River College holds a jazz recital put together by music professor, Dyne Eifersten, and included jazz recitals and showcased art made by faculty and students.

Dyne Eifertsen, a professor of jazz studies and the chair of the American River College music department, performed in a free jazz recital concert to showcase ARC faculty artwork.

Eifertsen plays in the The Riverrun Quartet jazz band, a group of local Sacramento jazz musicians who performed on March 27 at 7 p.m. in the music department room 547 with original songs written by the band’s performers.

Eifertsen is the trombonist. He played with Steve Lishman, tenor sax, and Paul Relvas on bass in addition to Scott Gordon, the new drummer who joined the jazz quartet band two years ago.

Eifertsen and the Quartet chose eight songs, with the theme of the music compositions ranging from the blues song played during the beginning of the session, to a short ballad in the second, to a final session entitled “Kathi” that was played for Lishman’s wife.

“This was all about original music,” said Eifertsen.

Eifertsen made the decision to host a free concert for to two reasons.

According to Eifertsen, the concert was made free to support the art of music.

“My hope is to lead by example for my students and show them I am as passionate about music as they are,” said Eifertsen.

Added Eifertsen: “Faculty members cannot charge admission for their own concerts on campus since it is a public institution and would be going against district policy … Rather than rent the facility and charge admission, I choose to make it free.”

Almost all of the songs played during the recital were played by Eifertsen and his colleague Lishman, who have played before on campus during the span of Lishman’s saxophone studies here on ARC in the past nine years.

Eifertsen and Lishman also created the set list for the songs that were featured that evening.

“We talk about what feels good here (and) a good tempo change,” said Lishman. “We do like to have our sets organized so that there (is) contrast and development amongst the tunes, not just one sounding the same way all the time.”

Added Lishman: “We wanted to do a ballad … I said let’s put ‘Kathi’ to have a change up piece.”

During the songs, student and faculty artwork were presented in a slideshow with each transition.

Ariana Grande says ‘Thank U, Next’ to “Sweetener”