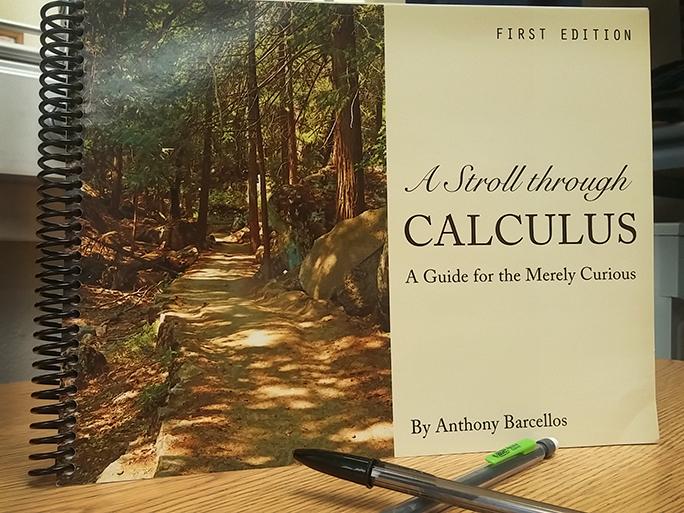 Professor Anthony Barcellos’s book “A Stroll Through Calculus”. It is an attempt to explain the basic concepts of calculus to the average person

An American River College mathematics professor recently wrote a book seeking to explain the basic concepts of calculus to anyone with the slightest grasp of basic algebra.

Anthony Barcellos, past recipient of the ARC Patrons Chair and Faculty Award and Honorarium, is the author of “A Stroll Through Calculus: A Guide for the Merely Curious.”

According to Barcellos, this is not a textbook and is geared towards the intellectually curious, not professionals or students enrolled in a course.

“I want to debunk the almost universal notion that calculus is super-hard math for geniuses,” said Barcellos.

Barcellos went on to say, “If a cartoonist wants to get across the idea that a character is a brainiac, tucking a book labeled “calculus” under their arm is a surefire way to do it – the truth however is very different.”

The math professor, who has been teaching for nearly forty years, insists that a person who understands notions such as “distance equals rate times time” or “area equals base times height” has enough knowledge to get started on the path to learning calculus.

The book covers areas of rectangles, notation, and polynomials as well as introducing the fundamentals of Newton and Leibniz and explains how each is applied. Examples are given throughout the book to allow the reader to practice each concept for better understanding.

According to Cognella.com, an academic publishing website, the book is an “excellent learning tool for students in engineering, pre-medical studies, and the social sciences and can be used in pre-service teaching programs for educators needing a solid background for math units they will teach”. It is available on the site from $30.95 to $38.95.

“I am very pleased with the way ‘Stroll’ came out,” said Barcellos, who came up with the idea after being displeased with an author’s previous work that attempted to do the same.

“The elements of calculus have elegant relationships among them that ‘Stroll” clarifies without getting bogged down in the formal proofs that a standard textbook must have – that’s why several of my calculus students have found the book enlightening,” added Barcellos.

Fellow professor Lill Birdsall has enjoyed past works by Barcellos.

“He is a fabulous writer – he has excellent grammar and articulates superbly,” said Birdsall of Barcellos’ fiction work, “A Land of Milk and Money.”

According to others around campus who have worked with him or attended a class of his, he is not only an excellent writer but professor as well.

“He is equally good at the highs and lows – he teaches Math 25, Computational Arithmeticas well as Math 402, Calculus II,” said Nancy Reitz, the interim dean of the mathematics department. “He is a sought-after instructor by the students.”

Rhiannon Coxsisk, a Paralegal major, agrees with Reitz when it comes to Barcellos’s teaching methods.

“He makes you want to come to class – he finds a way to make the subject fun and enjoyable,” said Coxsisk, who admitted she was not very good in math.

Coxsisk added that fellow peers have spent time sitting outside of class talking about the subject and teacher.

“I like his vibe,” said Marwa Sahel, a pre-medical student. “He’s really energetic and one of the only teachers that I have who lays out the subject out clearly with different ways to do one problem.”

Barcellos makes sure to keep constant communication lines open with his students – aside from office hours he also has a blog where he posts solution keys to exams and quizzes.