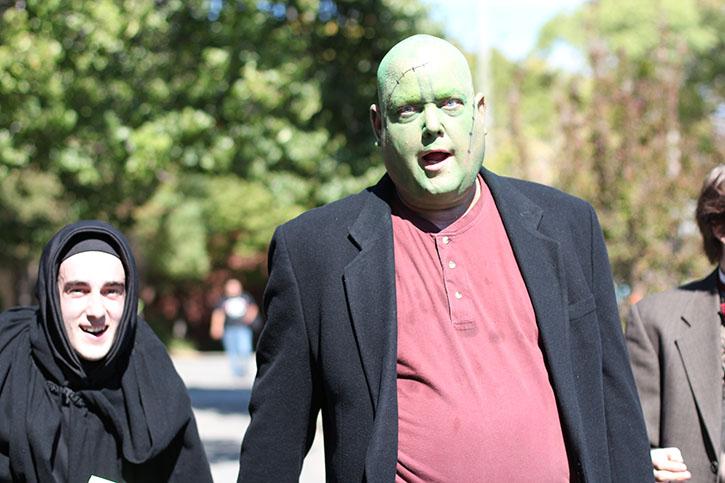 The ARC theater production is directed by Pamela Downs, who also directed the fantastic steampunk interpretation of William Shakespeare’s “Much Ado About Nothing” last spring.

ARC’s “Young Frankenstein” succeeds in evoking both the look and feel of a classic horror film from the ’30s.

The cast of “Young Frankenstein” was extraordinary. In a few moments during the course of the show, one could close their eyes, and it would almost sound as if they were listening to audio from the original film.

Particularly good were Ashley Rose and Juliana Nassr, who played the roles of Frau Blucher and Inga, and captured the characters’ accents perfectly.

Chris Hirtzel played Frederick Frankenstein, and has to interact with more characters than anyone else on the cast.

It’s a joy to watch the chemistry between Hirtzel and Igor, played by Micah Smith and the monster, played by Ronnie Reibel.

Reibel is a large, imposing figure who inspires fear with every movement he makes, but with that said, he can switch from being terrifying to hilarious at the drop of a hat.

The cast members’ performance gives off the impression this was an endeavour of love. Repeat viewings will be interesting, given how Transylvania becomes alive with the all the background activity from the chorus.

Fans of the original film will be pleased that the show is mostly the same, with the exception of an extended climax and a key scene taking place much sooner.

However, some gags do not translate well on stage, most notably the “Puttin’ On the Ritz” song-and-dance sequence, which is hilariously out-of-place in the film, but is expected in the context of a musical, and thus loses impact.

Even though the film “Young Frankenstein” worked around a different set of parameters than that of the source material, there was no question that Dr. Frederick Frankenstein was, in fact, a Frankenstein.

Frankenstein goes through a journey in the film, as he begins to follow his great grandfather’s footsteps. Just like those that come before him, the character is driven by his inherent curiosity.

The musical, however, presents a different Frankenstein; one who is essentially dragged by the hand by the characters around him.

“Young Frankenstein” has a long, awkward lineage. It is a musical adaptation of a parody of an iconic film franchise, which is a loose adaptation from the novel “Frankenstein” by Mary Shelley.

The “Young Frankenstein” film was written by Mel Brooks and Gene Wilder, with Wilder cast as the title character.

The novel “Frankenstein” was a tragedy heavily influenced by Greek mythology and the epic poem “Paradise Lost” by John Milton. Brooks and Wilder threw these themes out the window when they recast the principal characters as a comedy.

Despite the shortcomings of the script, “Young Frankenstein” is a worthy addition to the “Frankenstein” mythos.

The play is hilarious, and while the songs are not nearly as good as “Rocky Horror Picture Show”, they are catchy, and is manages to tell a compelling story.

Be the first to comment on "Frankenstein comes alive on stage"