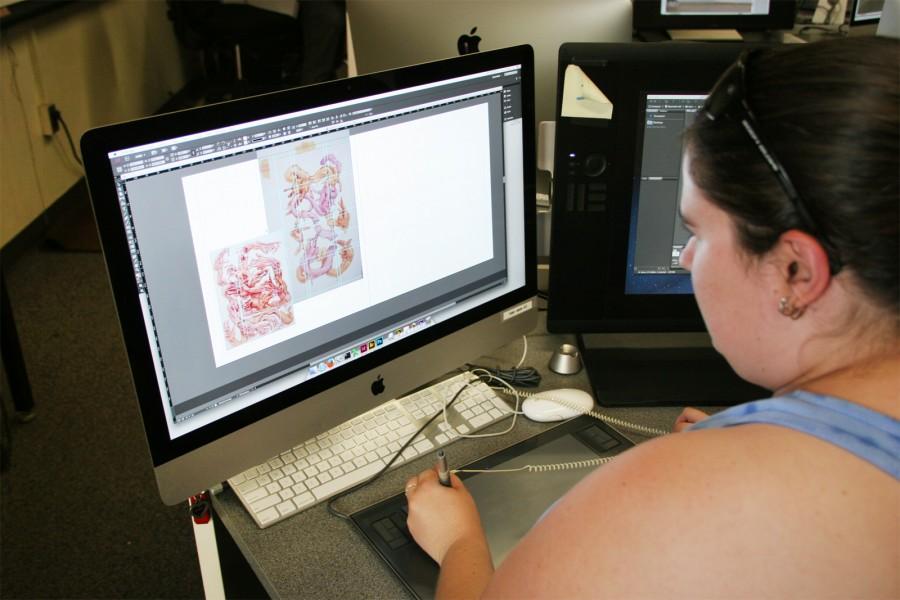 Art can be found all over the campus at American River College. From sculptures and artwork in and around the fine arts department to the Kaneko Art Gallery and poetry recitals.

But not many students on campus realize that there is an award-winning literary magazine published from ARC’s campus, and that it’s all done by students of three separate classes.

The American River Review is a magazine made yearly that displays various types of art including literary works, poems, paintings, sculptures and fashion. In past issues, they even included culinary food with recipes and simple instructions for the cooking process.

Each edition is a three semester process that starts concurrently with the previous issue’s third and final semester. It is also split up into three separate classes, with ENGCW 450 occurring during the spring and fall semesters and ARTNM 358 and 359 occurring spring and fall exclusively respectively.

Professor Michael Spurgeon describes the environment in his class as “ordered chaos”.

Bethanie Humphreys serves as Editor-In-Chief for the class and holds firm that they are responsible for every word and semicolon that goes into the magazine.

Humphreys served as EIC on the magazine last semester and describes it as a “dream second job.”

During the spring semester, the class will spend most of their time getting a variety works and spend the fall semester getting them finalized and proofread before sending it all to the Art New Media class to put on the pages.

According to Humphreys, this year’s issue is going to be very fiction heavy.

Students of the class can submit literary works of their own, but have to be under a pen name that only the professor knows. Literary works that are submitted, including their own, will be discussed in class.

Sometimes the students will be in class when their work is discussed, unbeknownst to their classmates that they wrote it.

Humphreys said that she has four pieces that are going to be included in the two hundred page or so magazine.

Humphreys spends a lot of time working on the magazine outside of class, and met with other classmates over the summer multiple times to help them meet a deadline they have during the third week at the beginning of this semester.

Around the fifth week, there is a deadline for everything that needs to be turned in for the current edition so they can be sent to the Art New Media class.

When the Art New Media class receives the works, they come up with creative briefs, which can provide multiple ways that the stories can be displayed on page in a creative way that helps tell the story and make it more than just text on a page.

The class is split into four general areas: design, production, gallery and fashion. Fashion and gallery have two active members that deal with their section which tackles a less amount of pages but puts in a large amount of work.

Fashion has four categories in which it displays clothing by means of a photoshoot. With mens and womens fashion, they also include a kids and punk themed fashion photoshoot.

Gallery has more to do with painting artworks being put together in a number of pages and determining which paintings would look good with other paintings.

According to Larissa Kimmey, who serves as the gallery editor, there are 95 paintings going into the gallery section.

The role of the production section is very heavy on photo editing and involves taking photos of sculptures and three dimensional artwork and cropping any unnecessary things out and color correcting them. As a result, they have to be very precise with each piece that they do.

Production editor Tashelle Miller is in her fourth semester working on the magazine.

With around eleven people in the production section, most students will work on editing at most six different pieces. According to Miller, the amount is based on the patience and skill of the student.

There are times where Miller says she likes to go into “OCD mode” and go into fine detail and precisely edit photos in the most up to date version of Adobe Photoshop, CS6.

The deadline for the production section to get all of the pieces edited is typically before Thanksgiving holiday.

Miller, like many other students, will come in a few times on Saturdays to get work done.

Sometimes a movie or music plays in the classroom, but that doesn’t stop them from getting their work done.

In terms of overall design, Amanda Layng-Martinez takes on the role of design editor for the magazine.

Concepts for the magazine get thrown around, and one has really stuck around. Layng-Martinez says that, as a whole, the magazine is going for a art new vogue style while being geometric and organized, while not becoming too contemporary.

The magazine will be 9” by 9” and the style will also have an influence of naturality in terms of design.

The American River Review has won awards on a national level, winning the National Pacemaker Award from the Associated Collegiate Press in 2012.

There is a certain pressure that goes along with being a part of such a large and accoladed production.

Layng-Martinez likes the pressure and is “positive and excited” about working on it. However, she feels most of the pressure from herself and sees herself as her own worst critic.

Overseeing the design side of the magazine are Professors Craig Martinez and Jeffrey Rochford.

Martinez is in his fifth year as instructor for the magazine, and was a professional designer before coming to ARC.

Martinez believes that this class is similar to a professional design studio in terms of behavior and the work itself. Having students who are committed and working together makes it enjoyable for Martinez.

When the semester starts, Martinez likes to play “bad cop” in an effort to get students to be committed and to weed out all of the students who don’t have the dedication to the paper.

As for maintaining the workflow, Martinez likes to hover and make sure students are being productive. He will have music playing in the background as he works on some of the production pieces.

For this issue, the class is on schedule and “so far, so good.” Martinez says the issue will be successful given the variables that they work with.

The pressure of the issue is always in the back of Martinez’s head. However, he believes that his students seize the opportunity.

“If I give them the opportunity to do good, they do,” says Martinez.

The deadline to submit any literary work for the 2015 issue of the Review is on Oct. 31.