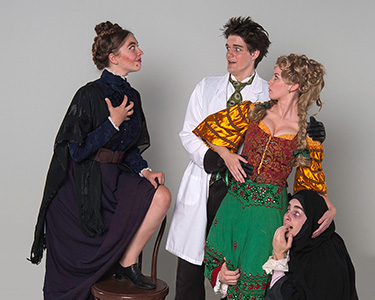 American River College’s theater department has many strong actors and actresses. But one of the last year’s newest, then-freshman Ashley Rose, made her presence known in a strong way.

Rose played a naive young bridesmaid in the dark comedy “Five Women Wearing the Same Dress” directed by Nancy Silva last fall season, and starred as Beatrice in “Much Ado About Nothing,” a classic Shakespeare comedy directed by Pamela Downs.

Following these two break-out roles, Rose was awarded the “Freshman on Fire” award by ARC theater faculty, which made Rose feel “even more special and proud of my accomplishments.”

“(ARC) has very talented directors and professors who care about the work their students are doing and really work to help them excel in their talents and succeed,” said Rose.

Rose auditioned for all three female roles in the Mel Brooks musical “Young Frankenstein,” which will be directed by Downs and choreographed by Sam Williams, and is set to take the stage in October.

Rose was given the role of Frau Blucher, Dr. Frankenstein’s housekeeper in the play, a leading role. This is the second play Rose will have worked on with Downs as director.

“Pam is very cheeky. She loves pushing the envelope, but she also knows how far to push it. … She just loves having fun and finding the joy and truth in every play she does,” said Rose.

Rose’s first play appearance was as Rapunzel in the third grade and she began taking acting classes in the seventh grade.

A graduate of St. Francis Catholic High School, an all-girl college preparatory high school in Sacramento, Rose is majoring in theater and minoring in communications, and hopes to transfer to a four-year university in Southern California next year.

Rose plans to continue acting at ARC and in the community at large after the “Frankenstein” production and will be taking classes during the Fall 2014 semester.

Looking farther than that, Rose doesn’t see an end to her acting career.

“I plan to pursue acting professionally. I know that the arts will always be integral in my life, but I believe acting especially will be something I do for the rest of my life,” said Rose.

Between her two roles at ARC last year, Rose sees much more of herself in that of Beatrice, a modern and strong female character for Shakespeare’s time.

“She is very confident, quick witted and comfortable with herself,” said Rose.

The Art of the Pickup: A look into the culture of Sacramento’s pickup artists

Be the first to comment on "Ashley Rose: From young bridesmaid to ‘Young Frankenstein’"