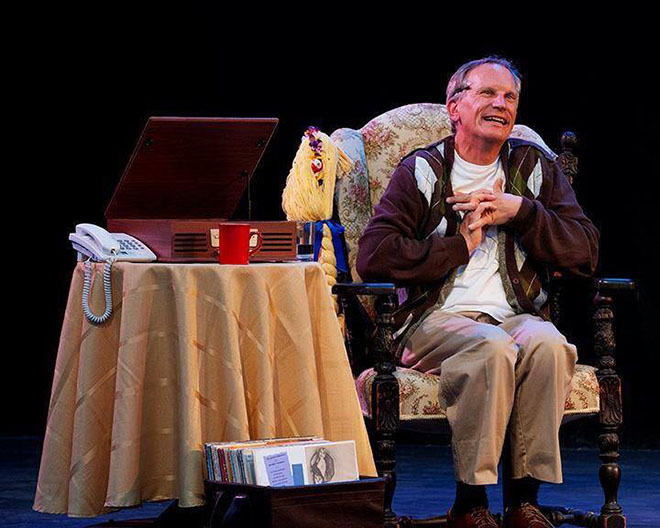 The first line of “The Drowsy Chaperone,” directed by American River College adjunct professor Bob Irving, is a simple three words meant to make the audience laugh. These three words are said by the musical’s narrator, Man in Chair (Daniel W. Slauson).

But he doesn’t really hate theater. He just misses the Broadway theater of the 1920’s.

With their broad archetypal stereotypes and classic tropes, the soundtracks in Man in Chair’s record collection are the only cure he has for feeling blue.

“Do you hear that sound? The static? To me, that’s the sound of a time machine starting up,” says Man in Chair as he drops the needle.

From the first musical number to the last note, “Drowsy” is a riotous and energetic parody of old theater and vaudeville. The show is massively entertaining and sure to please a crowd.

The musical was originally written and performed in 1997 as entertainment by a group of friends for comedian Bob Martin’s bachelor party.

There was no Man in Chair, and the subject matter was more adult and spanned from the ’20s to the ’40s.

Martin soon after became a co-writer and the actor playing Man in Chair, the show was adapted for stage, and it opened on Broadway in 2006, winning five Tonys.

Winfield, a veteran actor of ARC productions since 1997, has a deep amount of love for the play.

“(Drowsy) has always been one of my favorites … it makes a personal connection without being overbearing,” said Winfield.

All of the actors’ singing and dancing in this production range from solid to sharply spot-on, as the narrator takes you between the main plot, the “B” plot and the resolution that is over the top and happily ludicrous.

The show’s decidedly meta plot is laid out in detail by Man in Chair, and there are a few gags throughout that are too good to spoil here.

All in all, Man in Chair sums up perfectly the appeal of “Drowsy.”

“‘The Drowsy Chaperone’ does what a musical is supposed to do,” he explains.

“It takes you to another world and it gives you a little tune to carry in your head for when you’re feeling blue.”

Be the first to comment on "‘Drowsy’ sends up ‘20s Broadway"