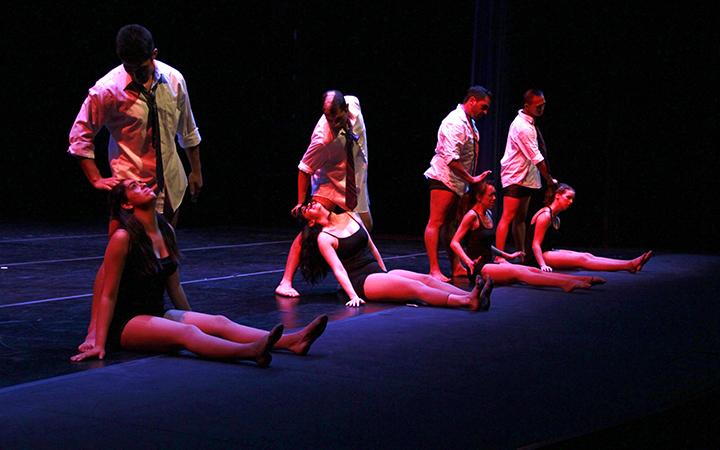 “I was in an emotionally abusive relationship before my boyfriend now, so I can relate to the panic and stress,” said performer Katie Sullivan, of the performance she and other American River College Honors dancers participated in to demonstrate the patterns of domestic abuse Saturday night at Sun Dances recital in the ARC theater.

They represented it well. During the dance, the four couples moved and interacted on levels from a bit pushy to downright violent. Martinez threw Sullivan to the ground, picked her up by her hair and smacked her around, all within the dance set to the J. Rice’s version of “Love the Way You Lie.”

“When I finally realized what was happening, my heart dropped,” said audience member Carolina Girwood of the performance.

But Sullivan said that though the dance was an impassioned representation of a dangerous and uncontrollable situation for many women, a situation she was intimately familiar with, she felt safe and in control.

“(Leaving) is easier said than done. It took me two and a half years to get out,” she said. “Having that history really helped me to connect to the piece. I had to trust (Martinez) completely.”

Sullivan and Martinez have been dance partners and friends for some time now and their relationship helped them to move in ways other dancers may not have been able to.

Many of the other dancers moved beautifully as well.

Spiritdancer Donaldson and Nolan Lewis smoothly played the eerie parts of Lonely Soul and Devil, respectively, in their dance to Tom Waits’ soulful “Way Down in the Hole,” and Heather Halk’s “smiley-faced” routine, “Simply Happy,” was delightfully infectious.

“There were a lot of really good pieces,” said Girwood, who has been a teacher’s assistant for several dance classes and was in dance company in 2008. She said she was surprised at the quality and technique of the dancers, particularly with her long-time friend and classmate Louis Moreno.

“Louis has only been dancing for five years. He’s really grown a lot as a dancer. I’m really proud of him,” she said.

Toward the end of the second act, the audience members were blessed with a gift. At the top of the performance dance director Sunny Smith mentioned that dancer Martine Hyson would not be performing tonight, and that the trio he was scheduled to dance in would simply be a duet with partners Kevin Haken and Nolan Lewis.

But Hyson was like the ghost of Elvis returning to the delight of those in attendance. They had been told Hyson had left the building, when in fact he had just returned to raise the roof.

Hyson, Haken and Lewis danced as though their bodies were alternately made of rubber and steel hinges, and Lewis was stomach-churningly double-jointed.

Certain members of the audience, including those seated with Clubs and Events Board President Jeremy Diefenbacher, were so rowdy in their appreciation of the night’s talent that dance director Sunny Smith had to come out before the second act and more consideration from the group, reminding those who were her students that she hadn’t turned in her grades for the semester yet.

Not everyone was boisterous in his or her acknowledgement of the dancers’s talent.

This is Kirk’s first year with the dance company and she participated in a half dozen numbers.

“It is so important to support our young people,” said Jones, “to be there for them.”

ARC Mom: from illiteracy to honors

Be the first to comment on "Dance company brings down the house with fresh talent and an impassioned performance."