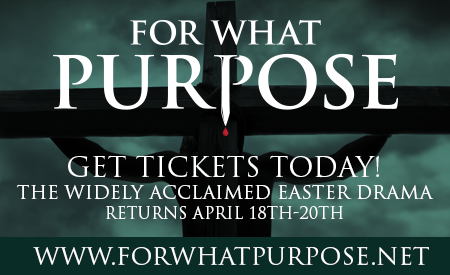 For hundreds of decades, the story of Jesus Christ has been told in several media, including live performance. This year a drama that was once considered “the largest theatrical production in Northern California” returns to the stage for Easter.

“For What Purpose”, a play written and produced by The Rock Church in Elk Grove, had run annually every Easter from 1986 up until 1997, but has not had a show since then.

After a new sanctuary that can seat 2,000 people was built in 2011, and with many people requesting the play be returned, the drama production has been resurrected.

The cast, consisting of members of the church, is currently over 200 and the stage is measured 3,500 square feet to accommodate the play.

Lisa Lombardo, who is helping with the marketing of the play, said the show has a radio ad as well as ads in local newspapers including The Fresno Bee and The Sacramento Bee to help promote the event.

Lombardo said people plan to travel to Elk Grove from out of state and also out of country to see the play.

There have been calls from states including Oregon, Washington, and Colorado to inquire about information regarding “For What Purpose”. People have even called from Canada and plan to attend.

Lombardo believes that because of the promotion and amount of inquiries she’s received, the play will be a success.

Paul Coran, an english major at ARC, attends The Rock Church and is participating in the production. He said he volunteered, went through tryouts, and got assigned the role of the temple soldier leader.

“It’s going to be a really great performance,” said Coran. “It has the potential of changing your life when it comes to realizing how exactly the story was and played out.”

The organization has an Instagram account with which they post photos and videos taken from behind the scenes of the production to be viewable to the public.

The play will run during Easter weekend, with a showing on April 18 and 19 at 8 p.m. There will be two showings on Easter Sunday, at 2 p.m. and 7 p.m. at The Rock Church.