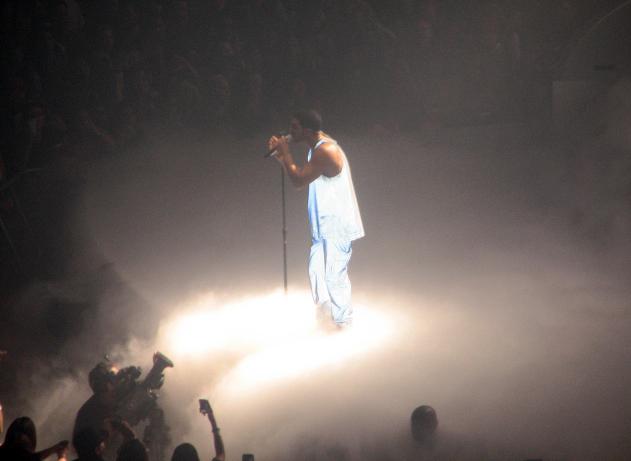 Hip-hop recording artist, Drake, performing in front of an audience of thousands at the Sleep Train Arena in Sacramento on Monday.

In support of his latest critically acclaimed platinum-selling album “Nothing Was The Same,” Toronto native and Young Money recording artist Drake paid a visit to the Sleep Train Arena in Sacramento on Monday for the continuation of his concert tour, appropriately titled “Would You Like A Tour?”

The near-capacity arena became pitch black with the exception of the glare from the various cell phones and digital cameras, and thunderous shouting erupted throughout as fans knew the moment they had anxiously been waiting all night to experience was about to take place.

Microphone in hand, Drake appeared, illuminated by the red backdrop and video projector. Seemingly wanting to put an end to the crowd’s anticipation, Drake wasted no time as he promptly tore into the first song of his set, “Tuscan Leather,” one of the outstanding tracks on his album.

Much like his music videos and television performances, Drake’s stage presence is all over the place. Though his videos normally receive negative feedback, his chipper personality and antics seemed to mesh well in the concert setting.

There didn’t appear to be a single soul seated. Much of the energy Drake exuded in his performance flowed from him into the fans, especially when he dived into songs such as “Worst Behavior,” “The Motion,” “305 to My City,” among many other cuts from his album.

Toward the end of his set, he brought out Def Jam recording artist Jhené Aiko to assist him in finishing his performance for “Come Thru,” as well as their up tempo collaboration “From Time.” It was at that moment that the intensity in the arena amplified. The chemistry that these two shared onstage was almost overwhelming, and left audience members yearning for more.

Those who have yet to see Drake perform in concert are missing out. Though his name sometimes carries a negative connotation, the man knows how to move a crowd.