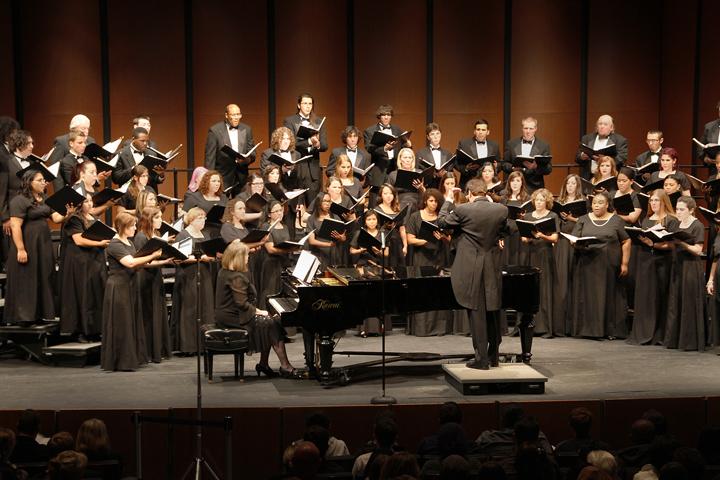 The ARC Concert Choir performed with the Chamber Singers and two local high school choirs at the Fall Choral Invitational Concert on Nov. 5 in the ARC Theatre. The Concert Choir is open to any student who can match pitch. (Photo by Brooke Purves)

The American River College Fall Choral Invitational Concert, held Wednesday at 7:30 p.m., in the ARC Theatre, was an opportunity for several students to reconnect with their former high school choir departments and for director Ralph Hughes to demonstrate to local high school students a small part of what the ARC music department has to offer.

Student choirs from two local high schools, Del Campo and Bella Vista, took the stage in turn with the ARC Concert Choir and Chamber Singers to perform for the packed house. Ushers had to set up chairs for overflow attendees to watch the performance on the lobby monitor.

The ARC Concert Choir, about 10 percent of whom are music majors, is what Hughes called ARC’s “y’all come” choir, and is open to any student who can match pitch.

The diverse choir did a good job of interpreting difficult music and finished strong with their interpretation of the traditional spiritual “Witness.”

When the choir from Del Campo High School, which Hughes called a “school of highest caliber,” rose from the audience to take the stage, they stood where some of their former colleagues had sung just moments ago.

“It gave me a feeling of nostalgia that I got to be reunited with them,” said Del Campo senior Drew Hanson. “It’s more of a warm experience that way.”

Del Campo’s choir lacks in men – only four of the 25 singers are male – but makes up for it in effort. “In This Ancient House,” a haunting Japanese poem, features powerfully subtle finger cymbals and prepares the audience for the minor chords in something nearly everyone in the audience could recognize: “Double Trouble” from the Harry Potter soundtrack.

The Madrigals from Bella Vista High School, where Hughes taught from ‘84 to ‘91, were beautifully uniform in their black dresses and tuxedos. The 21-member choir was well-balanced and enthusiastic in their a capella presentation of Early One Morning, an old English  toe-tapping delight, and appropriately reverent during “Adoramus Te,” a profession of religious adoration.

Several of the beautifully strong 28 members of the ARC Chamber Singers, who auditioned for the choir the first week of the semester, were visibly moved by “Ecco Mormorar L’Onde,” as they sang in Italian about the dawn appearing, mirroring herself in the sea and making the sky serene.

Hughes shared his responsibilities with two student conductors who chose and prepared the music for their respective pieces. Justin Vaughn led the classic hymn, “Abide With Me,” with the men, and Kay Hight and the women offered an amazing transformation of voices from song to the natural sounds of wind and chimes with the multi-layered and challenging “Windsong.”

The ARC Concert Choir and Chamber Singers combined for the last two numbers of the program, filling the risers to capacity and proving themselves a vocal power, especially during their presentation of the first movement of “Gloria,” which will be accompanied by an eight-piece brass ensemble with organ and percussion at their winter concert Dec. 10 at 7:30.

“They did really well. I was pleased,” said Hughes of the performance. “I think they know some things they can do better for the December concert. … but it was a nice, energetic start.

Ben Young, a former Del Campo student and member of both ARC choirs, enjoyed sharing the concert with former classmates. “It was really nice,” said Young. “I really liked to see how Pam Mitchell has been directing them.”

Young enjoyed his time at Del Campo, but is appreciative of the experience to sing at ARC. “Especially in Chamber Singers, you’re surrounded by amazing artists, by extremely talented musicians, and it helps you so much, because everyone has constructive criticism to give you.”

Zack Franklin, music major and 2010 Bella Vista graduate, expressed optimism at being able to watch his former classmates perform. “It’s a great opportunity for them and I’m proud to share the stage with them.”

Ballers, Britches, and Buttondowns: From Cotton to Cool

In Our Heads: Brooke Purves