With more left to cover, Apple updates the iPad line 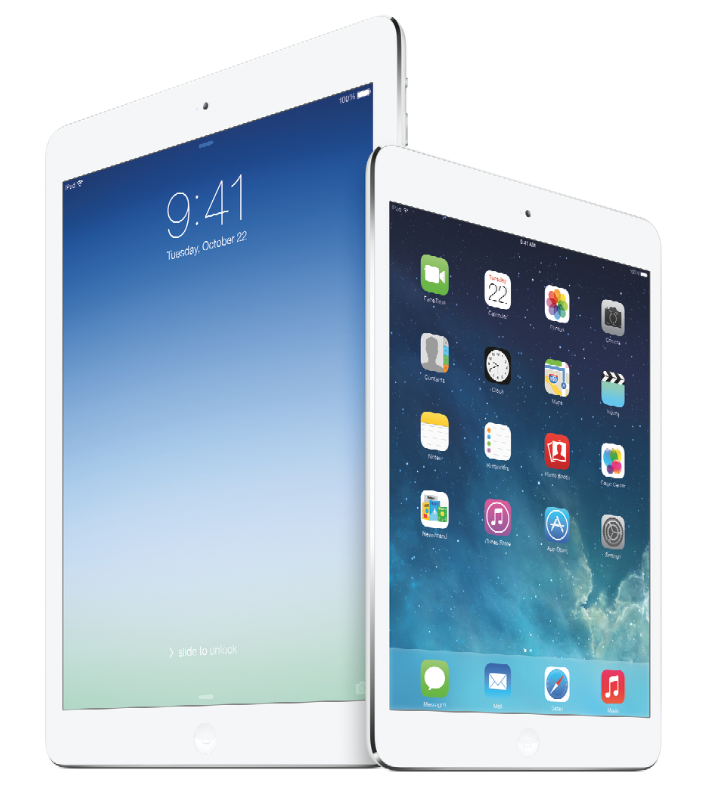 A look at the aesthetic of the new iPad line released Oct. 22.

Even though Apple revealed its newest version of the iPhone a little over a month ago, it is safe to say that it still had some cards left up its sleeve. In a press conference Tuesday, Apple announced changes to the iPad line, the Mac Pro, and OS X.

In the headlining announcement, Apple revealed the next generation of the iPad and iPad mini. The iPad got both cosmetic and hardware upgrades, and now goes by the name of “iPad Air.” The iPad Air is thinner and lighter than its predecessor, and contains the Apple A7 chip that is found in the iPhone 5S.

On its website, Apple describes the hardware as, “Desktop-class architecture. No desktop required.” With up to two times the CPU and graphics performance and up to 10 hours of battery life, the iPad Air is a powerhouse compared to original.

Not only did Apple update the main iPad, but the iPad mini as well. The update is more focused on the guts and insides of the iPad mini rather than the outside of it. A visually important upgrade is the iPad mini’s new retina display. In a retina display the pixels are packed together so tightly that you cannot see the individual pixels while looking at it from a certain distance. This means that you’ll have a crisper image and with a resolution of 2048 x 1536 pixels, high definition video has never looked better on the iPad mini. The new mini has Apple’s A7 chip as well.

Apple also made some announcements relating to its desktop and Mac consumers, revealing the release window and specifications for its recently redesigned desktop called the Mac Pro. This redesign was its first enhancement since 2003. Consumers can expect the Mac Pro to begin shipping in December at an entry-level price of $2,999.

An announcement teased earlier this year was brought to attention as Apple revealed its plans for the release of a software update for the Macintosh. The new operating system is nicknamed “Maverick.” The update is entirely free and went live right after the keynote. For your Mac to be eligible for the update to Maverick, it must be a model from 2007 or later and must be running OS X Snow Leopard or later.

One thing that wasn’t mentioned in terms of updating was the iPod line. Apple typically holds a keynote speech to update the iPod line every year in September, but the last keynote was in 2012. There has been an update to the iPod line every year since 2002 with the iPod Classic, but this year might be different. While the announcements Apple made were not as game-changing as those for the iPhone 5S and 5C, the keynote had a little something for all people who use Apple products in their day-to-day lives.