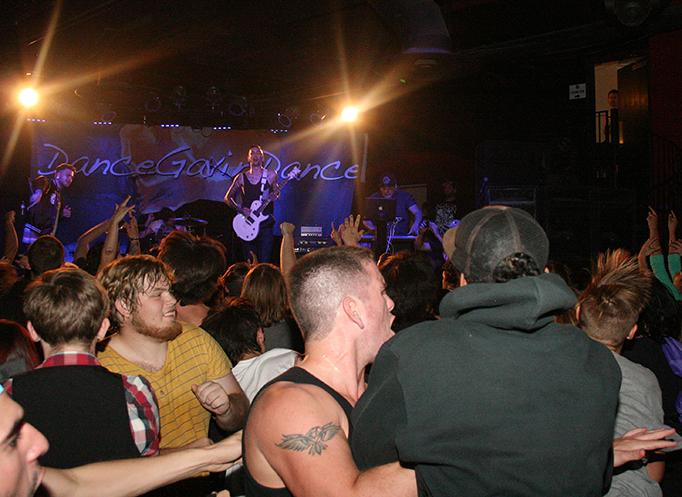 An inside look at the anatomy of a mosh pit.

You’re beaming as you exit the venue after watching your favorite band play. You’re drenched in sweat, your shirt is ripped, and you’ve got a little bit of someone else’s blood on your forearm.

To some this sounds almost barbaric, but to many concertgoers who spend their time in the mosh pit, these are all signs of a good time.

“At certain shows I go [into the pit], no questions asked,” said ARC sociology major, Morgan Leschke. “There’s this energy that can only be experienced in the pit and the band feeds off of the energy the crowd emotes and vice versa.”

The pit forms a vortex of energy from flailing, air-punching, shoulder-ramming and dancing.

“I’m an English professor, not a sociologist,” said ARC’s Christian Kiefer, “but to me, with punk rock, when it became so aggressive and so fast, you could look out over the audience and see a storm at sea. It becomes a weird mixture of ‘Fight Club’ and dance somehow.”

Just as the fights in “Fight Club” were in a somewhat controlled environment, so are mosh pits.

“As aggressive as it is, it still has to be safe,” said Kiefer. “It’s like being on a roller coaster. The bar has to be down, [but] you have to feel like you’re in danger.”

But the bar isn’t always down.

Paul Wertheimer, president of Crowd Management Strategies Inc., told ABC News that “nine mosh-related deaths were recorded between 1994 and 2006,” and an estimated 10,000 people were “injured in and around mosh pits in the last decade.”

This summer Kevin Lyman, creator of the Warped Tour tweeted why bands playing this year’s tour weren’t allowed to encourage attendees to “mosh” or form a “wall of death” (where the crowd splits down the middle and the sides run at one another).

Spontaneous pits were acceptable, but bands that encouraged one became responsible, and if kids were injured, parents could file a lawsuit.

Usually however, if people fall or get knocked over in the mosh pit you’ll see others stop to help them up. The overly violent person, “who has watched way too much ‘Headbanger’s Ball,’” as Leschke put it, will get “handled by the more dominant” people.

Despite the probability of injury, moshing fans know there is some sense of propriety in the pit. The different maxims of a pit depend on the music being played and the type of crowd present.

“No elbows, no fists, no knees,” said Jacob Maxwell, a commercial music business major at ARC. “One time I was in a mosh pit and I got elbowed in the chin. It just so happens that I had my tongue between my teeth and I bit through and put a hole in my tongue.”

That sort of violence can ruin a show for some, but in other cases, elbows, fists and knees are exactly what one would expect and enjoy in a pit.

“There are rules (and) they’re not complicated,” Kiefer said. “Like don’t paralyze somebody in the mosh pit. It’s not like you have to get a book on it.”

Leschke recalls slamming to the ground after sliding in what she’s “still hoping was beer or water” at an Every Time I Die show. “People helped me up and we went on to enjoy the rest of [the show].”

Of Mice and Youth: Why college-age people can’t be picky

Exclusive interview with Milo Aukerman of The Descendents