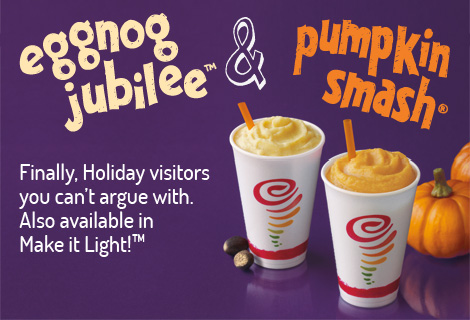 The seasons have changed and our favorite stores are taking their approach on the holidays by dropping seasonal drinks. To fully embrace the holidays its important remind our pallets what time of year it is.

Jamba Juice has already contributed two drinks for the holidays. In early October they released the Pumpkin Smash. Their pumpkin pie flavored smoothie, is made with soymilk, frozen yogurt and frozen pumpkin spice flavoring. Surprisingly it tastes just like pumpkin pie, in a 16 oz cup with an impressive 390 calories.

In November they also released their Apple Cinnamon Cheer smoothie. This smoothie tastes exactly like applesauce. With the added cinnamon they sprinkle on top, it pushes this beverage over the hump of being an average drink to a must try. This wonderful treat in a 16-ounce cup has only a surprisingly 310 calories.

Fellow American River College student, and Jamba Juice employee Samantha Salas recommends the Apple Cinnamon Cheer, “I’ve worked here for over a year and have and have tried all or smoothies, and this is by far my favorite,” Salas said.

Denny’s came out with Arthurs Milk Cookie shake that tastes great, but will have you feeling guilty afterwards. Its one size packs a calorie punch of 790. If you’re looking for something to cheat on your diet for, this is it for sure. It will give you all chocolaty and cookie goodness your diet is keeping your away from.

Nishyla Rice from Denny’s said, “ it was here the same time last year and I love it just as much as I did back then.”

For all you peppermint lovers who have been craving some peppermint flavored hot chocolate, you’re in luck. McDonald’s and Starbucks are currently in a showdown flexing their own versions of the classic peppermint hot chocolate.

McDonald’s version has whole milk and made in a 16-ounce small cup and contains 340 calories. Prices range from $2.29 to $3.29 depending on where you go. McDonald’s version does tastes like peppermint, but will leave you wanting more.

Starbucks’ version is also made with whole milk and is in a 16-ounce cup, but contains 470 calories for a small. Of course it is pricey at $3.15, but most items at Starbucks are. Valerie Erwin, an employee at Starbucks said,” I find it delicious and refreshing.”

So who is the champion?

Be the first to comment on "Seasonal drinks: Which ones are worth the calories and cash?"