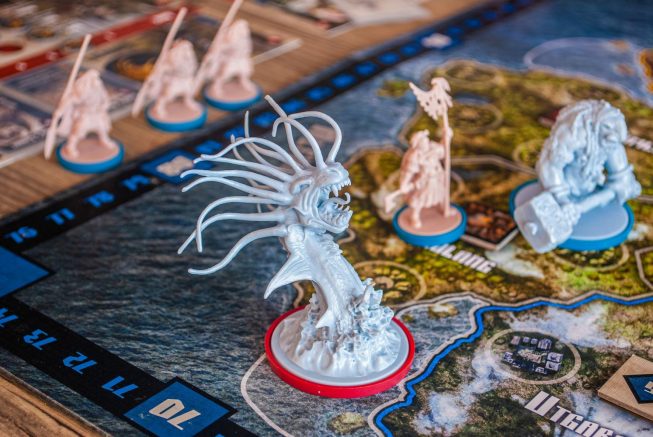 Board games are a good option for those practicing self-quarantining. (Courtesy of pixabay)

With the cancellation of classes all over the country, and the cancellation of various sporting events, concerts, and gatherings, people are probably disappointed and bored. One of the solutions for this, is diving back into some classic board games, or purchasing some slightly more difficult modern tabletop games. People might not know what to do to pass the time because of the self-quarantining, but board, card, and tabletop games remain a good way to pass the time. Here’s a list to get you started.

10.) The first game has been a classic since 1902, and is possibly one of the most devastating games to friendships. This game is Monopoly, a very competitive property/financial game that has players head off against each other in order to have the most money and the most properties, while financially destroying the other players. This game can be very time-consuming, and it can really make people strategize and deal with other players.

9.)  Nearly 40 years old, this next game is a war strategy game, but on a smaller scale than Risk. Where Risk is a global strategy game, Warhammer 40k is more battlefield based. Each player has a platoon and the goal is to defeat the other players’ platoon. The platoons range in combat style and amount, and there are some that have an advantage over others, but this game can be played multiple times with different outcomes. Easier to play in person, hard to master, and there are online video games that are slightly cheaper.

8.) This game is evil. It requires very little strategy, and it never gets old. The reason why it is evil is essentially because of how unfair it may seem over a while. This game is UNO. It’s a game where a group of 4-6 players go against each other to try and get their hand to zero as fast as possible, and anyone can win it by placing a card on the pile that has the same number or color. There are an assortment of various cards that do terrible things, like reversing the play order, making the next player draw two or four cards, skipping the next player, or change the next card’s color.

7.)  Risk is the original battle strategy game about world conquest. This game is started with players in their chosen countries with a handful of soldiers. Players then spend the following rounds expanding or increasing an area’s army. The way this game’s strategy comes into play is the fact that every round, each player gets more soldiers depending on the lands they control. More lands equal more soldiers, so the question comes down to how to maximize defense while getting as much land as possible, with very randomized combat based on dice rolls. This game can take a very long time to play.

6.) Magic: The Gathering is nearly 30 years old. This is a multiplayer card game that has players go up against each other in a combat setting. There are different ways to play magic, but this segment will only cover traditional or Elder Dragon Highlander (EDH). Traditional gameplay is sixty cards, each player has a 20 life-source level and is slightly quicker than EDH. EDH, or commander, is like traditional, however players have a 40 life-source level, 100 cards and one commander. The commander is a special card that can be used to strengthen a deck in a variety of ways: defense, life gain, countering, buffing up and ability to affect gameplay.

5.) This game is slightly older than Warhammer40k. It is also on a slightly smaller scale and is way cheaper, with more online options to construct a viable MECH. This game is called BattleTech. Essentially, this multiplayer game is on a battleground, with players creating MECHs to combat each other, and with either each player represented by a single MECH or a small group with different stats depending on play style. Lighter MECHs move faster and can also jump, but they have less weapons and armor. Heavier MECH’s can hold more weapons and armor, but their mobility suffers.

4.)  Most of these games have a role playing feel, or are just mindless competitive games, but what about other genres?  Betrayal at House on the Hill is a very different game. Essentially in this game, up to six players explore a house with rooms that generate as you enter them, with three floors. During the exploring phase, every time a room gets discovered the player picks up an artifact, an event happens that can either punish or reward the player, or an omen can occur. Essentially after a while omens pile up, and the players can no longer prevent the haunt from happening. What happens during the haunt is randomly generated depending on the room and omen, and the player correlates to the haunt. Essentially, the rest of the game is the rest of the players trying to defeat the other player which controls the monster from finishing their mission or escaping the house.

3.)  Risk and Monopoly are fun games, however, they can get boring after a while. Settlers of Catan is a lot more versatile because of the many different expansion packs that create variations of the game. Essentially, there is a landmass known as Catan that is randomly composed of tiles with resources on them. Those resources are: ore, sheep, grain, brick, and wood. Players need to build settlements in order to maximize on these resources and score victory points. Victory points can be scored by building settlements, upgrading to cities, building the longest road, building the biggest army or gaining development cards until a player has ten points to win. There are different ways of playing this game by either trying to steal resources, trade or isolate your settlement. This game has an online counterpart as well as other editions for various tastes, and all are very fun.

1.)  The game, Dungeons & Dragons, is for individuals who enjoy interactive game play. This game is essentially a story that people get to play through. The Dungeonmaster, or DM, conducts the players through an adventure, and what happens next is up to the players. The DM narrates a bunch of scenes, and tries to coordinate the players to get through. There is roleplaying, worldbuilding, bartering and combat strategy within it. DND can be played online. There are sites that have information on class building, backstories, world building, monster lists, difficulty adjustments, puzzles etc. The best of these sites is D&D Beyond, which is free.