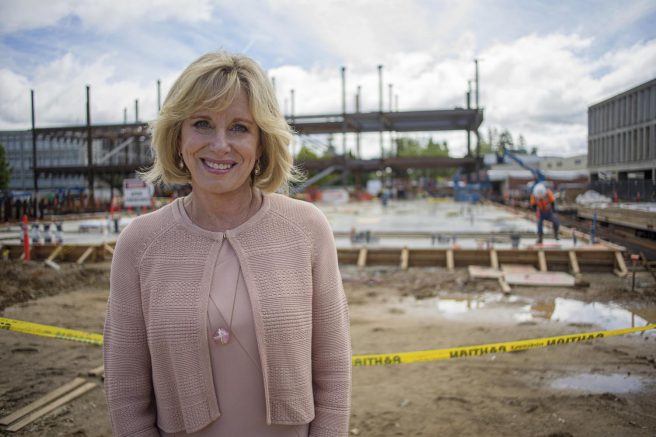 American River College alumna Diane Bryant stands before the framework of the Diane Bryant STEM Innovation Center, to which she donated a half-million dollars, and which is named in her honor. (Photo courtesy of Luis Gael Jimenez)

The last time Diane Bryant stepped foot on the American River College campus in 1983, she was a struggling engineering student.

Last spring, over three decades since she graduated from ARC, Bryant stood on the campus once again. The framework of the campus’s new Science, Technology, Engineering and Mathematics (STEM) center, which Bryant’s donation of a half-million dollars will help equip, tells an entirely different story of her life.

The ARC alumna formerly served as Intel’s Chief Information Officer and the Chief Operations Officer of Google Cloud. Now, Bryant’s contributions to ARC’s STEM building, which will be named in her honor, will fund the technology to support engineering students who may face similar adversities to the ones she did when entering the tech world.

“I haven’t been on the American River Community College campus in over 30 years,” she said. “It is heartwarming and that’s so much of it is familiar, and then it’s exciting and that so much of it has changed.”

Only a few hours before she was to speak as the keynote at the ARC 2019 graduation ceremony, Bryant stood before the skeleton of the STEM building and reflected on the journey that brought her back to this campus.

After being kicked out of her home at 18, Bryant was homeless. She spent three years at ARC studying engineering and technology. During that time, she continued to struggle financially.

“American River College holds a very important place in my heart, it was really there during a very critical time in my own life,” Bryant said in an interview the morning before the graduation ceremony. “I was homeless, I had no money and American River College was free. So it was the perfect college for me.”

Bryant said that it was a happy accident that she ended up in the tech industry. She was looking for a degree that would help her out of her financial situation.

“I did not want to be financially dependent on anyone. So I picked engineering and it’s been an incredible career,” she said. “I mean, the world at STEM is very dynamic, high impact, high value, high reward.”

Despite this, according to Bryant, the tech industry is highly underrepresented, not only for all women, but for men and women of color as well. This is why she says that community college STEM initiatives, like the one at ARC, could make a difference in the industry.

“It’s very important to promote STEM education inside the community college system,” she said. “You combine American River and it’s incredible effectiveness in attracting a lower income and minority population. You couple with an industry like STEM, which is incredibly underrepresented, and you get magic.”

Kirsten DuBray, ARC’s director of donor relations, said Bryant’s donation will fund a portion of the school’s goal to raise two million for the STEM building.

DuBray explained that the donations won’t necessarily fund the building of the center, but rather the modern tech, features and supplies that would aid in student success.

“Often-times when donors give money, they think it’s brick and mortar. It’s not, it’s what we like to call margin of excellence funding,” DuBray said. “So this is equipment, because you can imagine a building like that will be our most modern [and it] has got to have technology, we have to be able to sustain it.”

Bryant says that ARC set her on track to transfer to University of California Davis and into her first job as a junior electrical engineer, working on the 46 microprocessor, for Intel in Folsom.

From there, Bryant says she was transferred to Intel’s headquarters in Silicon Valley where she climbed from a junior engineer, to an engineering manager, to a general manager and then to Intel’s Chief Information Officer.

The tech mogul then made the move to Google to take on growing their cloud business as chief operations officer (COO).

Now, Bryant is searching for her next mountain to conquer.

“I’m on two public boards as a director and I’ve invested in the board of a startup, an artificial intelligence healthcare company that I’m very excited about,” she said.

DuBray says that while the program had garnered donations from multiple sources, Bryant’s story adds a deeper layer of significance.

“It’s a really great story to have a successful alumni [who] stepped up and gave us such a significant gift,” DuBray said. “She really wants to encourage women and underrepresented students in stem.”

It’s because of this significance that the Los Rios Community College Board of Trustees voted to name the building in her honor: the Diane Bryant STEM Innovation Center.

On the evening of May 22, standing on the ARC graduation stage Bryant reflected on her time in college and advised the 2019 graduates on their future.

“Each and every one of you here today is on a path to become the leaders of our future,” she said. “[W]e live in a complex world and as we begin our careers and pursue our dreams, we all could use the help navigating that complexity.”