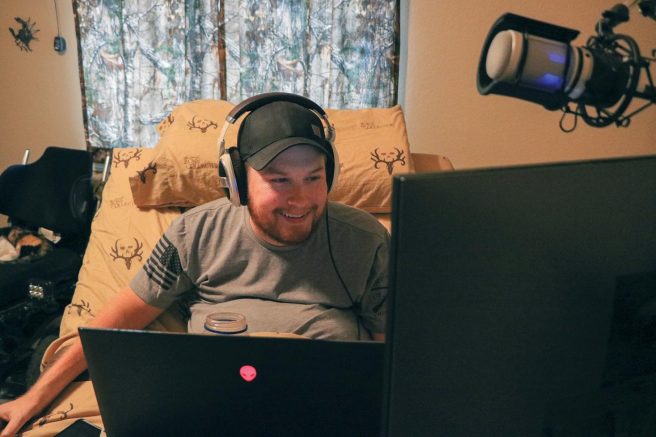 After a life-changing accident, when he was 17, Nick Rouse found gaming as a way to connect with and encourage other gamers with disabilities. Now, Rouse's YouTube channel, Quadnick, has over 11 thousand subscribers. (Photo by Jack Harris)

“Without video games I definitely would’ve been a lot worse off. It helped me live another life.”

When Nick Rouse was 17 years old he fractured his C1 vertebrae, shattered his C5, and lost movement as well as most feeling from the chest down. Despite this life-changing event, Rouse has developed a successful gaming YouTube channel, and has found a community of gamers who have similar life experiences.

Eleven years ago, Rouse and some of his friends had a rope swing on the bank of the American River. Rouse says he dove into the shallows and hit his head on the river bed.

“That day, I released a little too late and it carried my momentum and so I went down instead of horizontal,” Rouse said.

He surfaced face-down in the water, unable to move at all. According to Rouse, his friends didn’t do anything at first, thinking he was just messing around.

“Enough time passed that I couldn’t hold my breath anymore, I had to inhale water and everything just went white,” Rouse said. “I felt like the best I’ve ever felt in my life, it was insanely peaceful.”

Eventually, Rouse’s friends got him out of the water and called for an ambulance.

“The EMTs came and were checking me out, they were asking me to move my toes and if I could feel this and that, and I knew already what it was,” Rouse said.

Over a decade later, Rouse looks back on that day.

“I just yelled out ‘I’d rather die than be crippled,’ which is not the case anymore but at the time I meant it,” Rouse said.

Today, Rouse has no movement from his chest down, and he says he only has about 20% feeling. The injury also limited some of his movement from the chest up, including some tricep movements and use of his hands.

In the hospital, Rouse was taught how to make the same type of finger splints he wears today. The splints help him uses his index fingers.

When he was able to return home from the hospital, Rouse says there was a lot to adjust to. His mom got him a laptop to give him something to do, and he came to realize that he was able to play videogames despite his injury.

Rouse has been an American River College student since 2012, and he had originally planned to be a game designer. In order to get a nicer laptop, Rouse says he told his mom he wanted to make his own video games, and that he needed a more powerful, gaming-suited computer to do it.

After four years and a few laptops, Rouse says his mom finally compelled him to make good on his promise that he’d learn how to make games.

“To be honest, I wasn’t all that certain that’s what I wanted to do, it’s just something I had to say so I could get a laptop,” Rouse said laughing.

Rouse says that game design proved more difficult for him than he expected, because in the education process they expect you to learn all aspects, including animation and character design, which involves clay modeling. As a result of his injury, Rouse is not as dexterous as those aspects of game design demand.

In the spring 2019 semester, Rouse changed his major to social sciences, and started committing more heavily to his YouTube channel, which was becoming a larger part of his life at this time.

Rouse says that YouTube was initially just a means of video storage for videos he made with his friends.

Rouse says he plays a lot of a game called Rocket League, which is a soccer video game where instead of human athletes there are cars. His YouTube channel changed when he rebranded as Quadnick and reached out to Rocket League YouTuber SunlessKhan, according to Rouse.

Rouse had an idea for a video with SunlessKhan called “Are You Better Than a Quadriplegic?”

The video, which has amassed over 1 million views, shows SunlessKhan and Rouse to team up to play opponents of increasingly high rank in matches of Rocket League. Before that video, Quadnick had 100 subscribers. Now, he has over 11,000.

Rouse is largely unable to move his fingers, so his playing style is dramatically different than most people. He can’t use a mouse, and can only press two keys at a time. As such, each game he plays he must heavily modify the control layouts. He also has 130 hotkey templates from games he’s played over the years. These templates modify the original controls of the game and make it so that he has to press less keys at any given time, while still playing the game effectively.

To help viewers see what he’s doing, most of his videos have an overlay called NohBoard, which is a virtual keyboard that shows what keys are being pressed.

The NohBoard overlay is paired with a camera pointing down on Rouse’s hands and physical keyboard. Rouse says this works almost as free advertising.

“Other channels see my clips and ask for permission to use it on their own channel for their own montages,” Rouse explained. “If [other channel’s viewers] see my hands they’re like ‘what the f–k is that guy doing’ and then maybe look me up.”

Rouse says that YouTube, paired with his disability, has presented him with cool opportunities.

“I’ve met a lot of other disabled people and we’ve played together,” Rouse said. “I love finding out what happened to them and how they get over their disability and still be able to play.”

Rouse says that his favorite part is that he has met around 10 other disabled gamers through his channel. They reach out to him and share their stories.

“Without sounding too cocky or too full of myself, I kinda talk them into putting themselves out there a little more,” Rouse said.

A number of the disabled gamers Rouse has met now have YouTube channels or are streaming.

“Nick is one of the most kind-hearted, genuine people I’ve ever met in my entire life despite the things that have happened to him in his life,” Swasey said. “I’ve never met someone with a more positive attitude.”

Michael Pitts, who has been friends with Rouse since childhood, says he admires Rouse’s attitude in the face of the hardship he has endured in his life.

“His perseverance and attitude are unbelievable,” Pitts said. “He’s had a lot of hard things thrown at him his entire life, and I don’t think I have as positive of an attitude [as him].”